Reactions to Sundin signing in Vancouver

Share All sharing options for: Reactions to Sundin signing in Vancouver 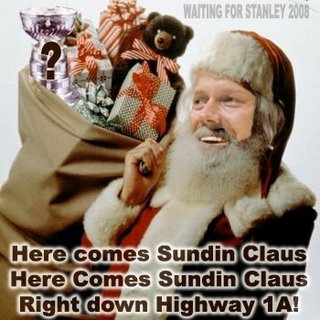 Yeah I am throwing Sundin under the bus, but its no less than what he deserves - he threw the fans under the bus when he refused to be traded for futures, and elongated Toronto's trip to the cup by at least another 3 years - he went on record about not wanting to be a rental player...blah blah blah

Whatever Mats - your reputation is finally come to light, and you wouldn't even go to a Rangers team in better contention for the cup - do you honestly think that Vancouver team will make it past Detroit? San Jose? Please...lets remember the OTHER reason your going to Vancouver - that its almost guaranteed you'll be gone in the first or second round of the playoffs if you make it there...

Vancouver - get used to Sundin eating up all the ice time with a "one-man-show" and robbing your young players of development and points...your going to come to the same conclusion Toronto is finally coming to: that maybe he just wasn't worth it...

OK,
1. Sundin didn't have to lift his NTC if he didn't want to. It's not his fault the Leafs put themselves in a shitty position by pissing away good talent to sign overpriced veterans.
2. The Rangers team is not in better contention to win a Cup necessarily. Injuries and Cinderella teams can pop up at any time. Just for shits and giggles, I think that if the Devils are healthy come April, I'd say they are my favorite to make some playoff noise over most teams including the Rangers. The Capitals should go furthur than the Rangers as well.
3. Don't call Sundin a "one-man show." He has been carrying deadbeats for linemates for some years now. Think Ponikarovsky, Antropov, Reichel, Hoglund, etc and he still put up a point-per-game numbers.
4. Robbing young players of points? Maybe in Toronto! The way Vigneault juggles lines, I think Sundin will make some young guys score MORE points.

The expectation is the Vancouver Canucks will still have approximately $2.5 million in cap space remaining, which means the team will be able to potentially take on a player earning around $6 million at some point in the New Year using the prorated formula.

While Sundin will walk away from the 2008–09 season with close to $5 million in his pocket, he's leaving some on the table and giving Canucks general manager Mike Gillis the flexibility to land another top six forward through a trade.

While that is a great thought, we don't need to become the Maple Leafs now. A major injury to a quality player will force Gillis' hand into another signing or trade, IMO.

"Oh, hell ... it was a shame. But clearly, if there is now about twice as high wages, then it is difficult to say no," Henke spontaneously commented.

Roughly translated, but you get his drift. He needs some Kleenex.

I know I'm evil...I loved seeing Naslund look sad in an interview today expressing that was unfortunate that the Rangers couldn't get Sundin and that Mats will make Vancouver a better team. Thanks for leaving Markus! The $6 million you took with you is going towards Sundin's salary! Thanks buddy! Have fun in Manhattan! 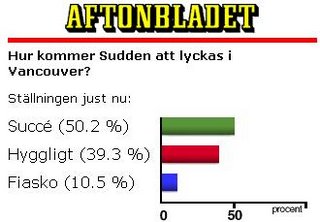 That poll asks how Sundin will do in Vancouver: Success, fine or fiasco were the options. I can't get Hockeyexpressen's polls to load up, but I believe over 80% of Swedes wanted Sundin to play in New York. Must be the love affair they have for Lundqvist and maybe Naslund.

Still nothing up at the Rangers page in the New York Post. I guess eating crow for dinner sucks hey?

Nothing up about Sundin to Van at the Rangers home site either. Are you guys not used to being told "no"?

Fine then, I'll go to the Rangers forum at the HF Boards:

Let this be a lesson, it's all about the ******* money, I honestly hope he doesn't score a single point all season, after dragging this out so long just to take the money anyway. LARRY BROOKS=NO CREDIBILITY so much for Sundin itching to play here, FAN590=NO CREDIBILITY, EKLUND=NO CREDIBILITY, NEVER HAD ANY ANYWAY. I hope Vancouver comes in next year which I doubt so I can boo the **** outta Sundin

-now here is a guy who knows what he's talking about!

I just don't get it. Why are you guys so down on your team? EFF Mats Sundin. What the hell has Mats Sundin "The Savior" ever won in this league? He was never going to suddenly propel the Rangers into Cup land.

With that said, so many of you are really down on your team. I just don't get it. They aren't losing, in fact, they keep winning inspite of all the negatives around here. Drury is coming on, Rosival just had an awesome game, Henrik is amazing, Vally is one of the best backup's in this league.

I just don't understand.. is being a first place team this miserable? I can't put my finger on what the hell you guys feel is wrong with your team. I just don't freaking get it.

Another guy who knows what he's talking about.

Here's a lousy fail by one Rangers fan at Rangers.net. He asked the question a couple of days ago: "Should I have sewn the "A" on my (Sundin Rangers) jersey? Bwahaha!
Tip to the CDC Forum guys for finding that one.

What are Canucks fans saying?

The Yankee Canuck is not impressed:

My heart sunk a little when I saw the TSN graphic. I disagree with Leaf-Happy Sean that this makes us a contender. Why? Because we already were and now have no cap space when we get nailed with injuries (like, oh, last night when O’Brien and Salo went down) or when we have a shot at acquiring a younger player who will stay longer than a few months and could be another crucial building block. Honestly, I still stand by every line I said when I asked him to go away.

Dreger pointed out the cap space flexiblity we have. Gillis wants to win NOW. Were the Canucks a contender before Sundin? Anything is possible when you get to the dance. But I think Sundin gives us a much better chance. Look at how deep we are at center now! Look at how deep Detroit was at center when they won the Cup. From the goaltending-out we're looking pretty good.
But Mike does raise good questions in NOW what does this mean for the contract negotiations with the Sedins, Ohlund and Raymond? Well, here is what I think: Sundin only signed for 1 year. Next year he may bolt. Gillis will know that by next July. So it seems that contract negotiations with those players has been broken off for now. That OR Ohlund will get moved at the trade deadline. There are all sorts of options still. I don't know about you guys, but I think this Canucks team has what it takes to win NOW. So go for it, Gillis! Do I fear San Jose in the playoffs? No. Why? Because Joe Thornton turns into a sleeping yard ape in the playoffs. He didn't carry the Sharks last year.

The Humming Giraffe is also a Cautious Giraffe:

With a healthy Lui, that line up is pretty sick. The idea of announcers calling Sedin, Sedin, Sundin on the power play does amuse me. I’m…cautiously optimistic. Canucks fans should always be cautious.

I understand how Canucks fans feel they need to be cautious. But this time I really think Gillis deserves praise and we should feel plain ol' optimistic.

Former Maple Leaf Kyle Wellwood seems to be working out for us (mind you there’s still some name calling going around), but are Vancouver fans ready to accept another Leaf on our ice?

Are Canucks fans that sad that they refuse to accept former Leafs? Yeah, it was there with Wellwood coming here and I stood by him 100%. Look at him now. Sundin will exceed Kyle Wellwood and Canucks fans will chant his name, once they get over being cautious.
I guess I have to post some Sundin clips to get some Canucks fans excited. Do you really know who we just signed today? A guy that had 79 points in 73 games last season. A guy that wants to be here. A character guy in the locker room. A team player. A leader. Has Gillis let us down yet? Au contraire. The guy flogged 2 fan faves in Morrison and Naslund and turned us into a contending team with balls. What more do you want? When are you going to trust him? (Complete list of Gillis moves here.)

I couldn't get into Canucks and Beyond for a while there, but I see Alanah more or less shares my sentiments.

Sweet dreams, Canucks fans. And say bye-bye to the Canucks cap space breathing room we enjoyed for a while. But that’s okay—having barely a single dime left in the bank feels like everything is back to normal in our world.

And one final thought: I’m betting that Sundin looks pretty awful for a while, but he’ll improve fast. He’s in good shape. But that won’t stop everyone from suggesting he’s washed up while he’s getting back into game shape.

So just have patience—I expect he’ll be a factor in no time.

The commenters on her post are mostly thrilled as well. Good stuff.

I gotta be honest with you: I am so glad this damned saga is over with. Since July I have pathetically been reading Swedish newspapers at night seeing if there was any peak into the Sundin situation. I have shamelessly covered most of the painful story here since the summer. As pathetic as that may seem or was, it now seems worth it... 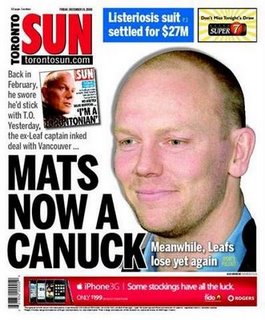