Panthers are Kings of the Road

Share All sharing options for: Panthers are Kings of the Road 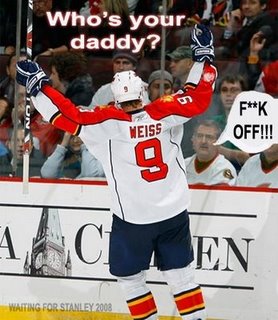 Powered by the longest road winning streak in franchise history, the Florida Panthers are climbing up the Eastern Conference standings. To extend that run, however, they must win in a city where they haven't done so since their inaugural season.

Florida looks to win its sixth straight road game on Sunday night when it visits the Vancouver Canucks, who haven't lost at home to the Panthers in more than 14 years.

The Panthers have played the Oilers, Flames and Senators on this road trip and beaten them all. Stephen Weiss has scored the winner in each game.
I didn't watch the Canucks' 3-0 loss to the Oilers last night due to a poker night and apparently I picked the right game to miss.
Alain Vigneault mentioned that he had nothing positive to say about his club in the loss and that they were "out-everythinged in all areas."
The fact they scored no goals against the Oilers is disturbing because tonight they face a red hot goalie in Craig Anderson, who has a 5-1-0 record with a 1.71 goals-against average and two shutouts since Nov. 30th. His 0-3-1 record with a 3.17 GAA in four career starts against the Canucks means nothing right now. Not when he's playing like this.
It looks as though Cory Stillman may return to Florida's lineup tonight since being out for several weeks with a concussion. Maybe that will disrupt their team chemistry a bit. One can hope.

I think we can expect a better Canucks effort tonight. Maybe Alain Vigneault will do his usual line-shuffling to shake things up. Does he go with Cory Schneider? I don't think he should. Let Sanford redeem himself.

Should be a tight game. Maybe low-scoring. I think the Canucks will take this one. The have to. Hell, we need to play 500 hockey in Luongo's absence and that is not happening. Bring in Sundin!

I will be co-moderator with the Yankee Canuck for the Canucks.com's Live Blog for tonight's game. Always a good time there, check it out!