No, the Canucks can NOT finally beat the Avalanche

Share All sharing options for: No, the Canucks can NOT finally beat the Avalanche 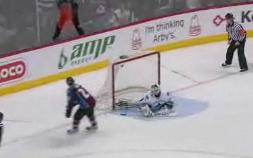 In a game where Steve Bernier arose from the grave to score 2 goals the big picture is that the Avalanche really exposed Cory Schneider. Ryan Smyth mentioned post game that basically Schneider looked a bit shaky to start so they put 1 and a lot of times 2 guys in front of him to distract him. It worked. It especially worked on the goal that made it 4-4.
The Avalanche are deadly in the shootout. When the camera panned the Canucks' bench just prior to it I thought I saw a look of concern on a lot of their faces. Sure enough, Wolski (wow what a goal), Svatos and Hejduk all made Cory look silly in their shootout attempts and the damned Avalanche beat us again. Schneider banged the post with his stick and looked disgusted.
To be honest, in a game like this it sure would have been nice to have Roberto Luongo back between the pipes.
Yeah the single point was nice, but still a frustrating loss.

-The single point gave us 33 points to tie Calgary for top spot in the Northwest. What a win by Calgary in NYC today. I thought the Flames were supposed to collapse...

- The Sedins were playing possessed tonight.

- How about the scoring chances by Bernier and Edler in OT? If only they had converted. Bernier was a goal post away from a hat trick.

- Demitra had an assist, finally getting a point after 5 games.

- Wellwood looked like he stayed up until 4 AM the previous night playing Halo. He was quiet tonight beyond his shootout goal.

- Ryan Smyth rubbed Hank Sedin along the boards in OT and it looked like the Swede was hurt. We'll see what happens there.

-After only 5:38 of icetime, Salo left the game with an injury. I missed what happened there. My bet is he sneezed and probably cracked a rib.

- the first 2 paragraphs in this post. There is a lot of pressure on Schneider. Let's see how he responds against Nashville on Tuesday.

At one point the Canucks were running away with this division. Look at it now:

A 6-point spread from top to bottom. Let the dog fight begin.