My thoughts on Trevor Linden

Share All sharing options for: My thoughts on Trevor Linden 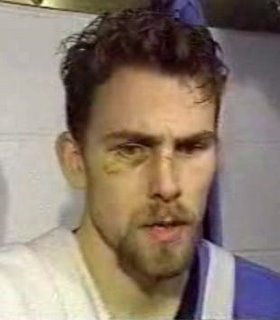 I am going to be as honest as possible with this.
As many of you know, I was a huge Leafs fan from 1977 until about 2 years ago. I still don't mind the Buds, but my loyalties now lie with the Canucks. Sure, I watched all the Canucks games that I could back in the day on CTV, using rabbit ears on a lousy old TV. Yes I cried when the Islanders swept them in 1982.
But my loyalties in the 1994 playoffs were pushed to the limit. I was loving Doug Gilmour, Wendel Clark and Felix Potvin in Toronto. Pat Burns had them playing so well defensively. I really thought the Leafs would beat the Canucks in the semi-finals. All of my friends back then, being Canucks fans, were mocking me during the whole series. I stood by my team. But Trevor Linden and co. demolished Toronto in 5 games. I was shocked and angered...seeing Gus Adams bag that OT winner at the Pacific Colisseum and watching poor Potvin slump into his net.
I actually hated the Canucks for knocking off the Leafs. In fact, and I hate to admit this, I was actually cheering for the Rangers early on in the Finals because I was so mad at Vancouver.
I think it took me a fair bit into overtime in Game 1 to get over my stupidity and rally for the home team. OK, I got that off my chest. Why was that significant? Because that hardly-arguably was the best Finals in NHL history. And when the gritty Canucks pushed the Rangers to 7 games, it was a scar-faced Trevor Linden that grabbed his team by the throat in that Final game and nearly propelled them to a Cup win.

I don't want to put too much spotlight solely on Trevor Linden for that playoff run, because the team he played with was such a tight-knit unit and Kirk McLean saved their butts over and over again. But Linden's Game 7 performance against the Rangers will forever be etched in my mind. What a duel of the captains. Messier vs Linden. And both had the game of their lives.

Who could forget this little tip in goal in Game 7 versus the Stars. He was projected as too old to still play (I was one of those people saying that-shame on me).

I travelled to Montreal and saw Linden play for the Canadiens in late October 1999. They beat Gilmour, Hasek and the Sabres 5-4 that night. Linden was named NHL Player of The Week, scoring 8 points in 3 games while I was over there. That was the first time he ever received that honor. I remember reading the Montreal papers and seeing him receive that honor and being somewhat stunned, because this guy had played for the Canucks for so many years. And now here he was lighting it up in Montreal.

I was also very fortunate to be able to attend the Canucks 6-2 win over Calgary late last season with my wife, where Linden scored 2 goals and was the game's first star. The fans roared as he skated onto the ice, and we drowned out the post game interview with Linden, putting a smile on his face. Those were the last 2 goals he scored as a Canuck, as the team would lose the last 3 games of the season and only score 4 goals. Linden would get 1 more assist in those last games.

Those are my best Trevor Linden memories. I was never as devout a fan of him as most Canucks fans are, but I can respect what he did on and off the ice. Wednesday night will sure be an emotional one. I can't wait to see him honored and to hear the fans roar once again for him.

Oh and speaking of devout Linden fans, check out Alanah's article at Fan Zone. It's got a lot more depth to it and is a must-read.