Share All sharing options for: Melroses bluntly mouths off about Tampa experience 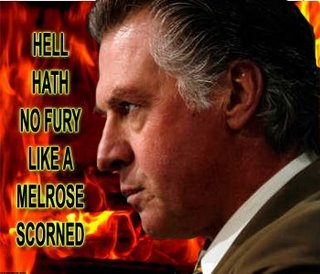 While he didn't name the people involved, Melrose said that he dealt with constant interference from people in the organization.

"I had guys in Tampa who wanted to run the team and I wouldn't let them. I was hired to coach and I coached," Melrose told the Fan 590. "I wasn't playing the right guys. I was playing certain guys too much, I wasn't playing other guys enough. Every day was a constant battle.

Despite many off-season changes to the roster, the Lightning are the worst team in the NHL, with a 6-13-8 record. In the 11 games they have played since Melrose's demise, the Lightning have won just once.

When Melrose was asked if that statistic gave him any glee, the former coach was very candid.

"I'm not going to lie to you, yeah it does, and any coach who tells you otherwise is a liar," Melrose told the Fan 590, adding, "I hope Tampa Bay doesn't win a game in the next year."

Love it. At least he's honest.
With Radim Vrbata and Chris Gratton already put on waivers, it's goingto be interesting to see what else happens in Tampa this year. In the end, you can't always buy chemistry can you? What a disaster.
There's still more comments from Rick Tocchet and Mike Smith at that article. Check it out.