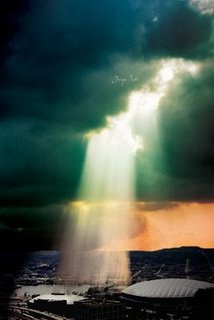 Just saw it reported on Sportsnet that Roberto Luongo is scheduled to start practicing on the ice by mid-week. I hope this isn't a knee jerk reaction to recent Canucks losses. Hopefully Luongo is truly pain-free. As Jason Botchford put it today:

The temptation will be there to push Luongo again. In the 15 games since he went down, the Canucks have given up 46 goals, or 3.07 a game. Before Luongo's injury, the Canucks were giving up only 2.28 goals a game.

Correction: Mats Sundin will arrive in Vancouver Monday, not Tuesday. He will address the media at noon on Tuesday, Sportsnet reported.

So as the HockeyCentral panel just joked: "it's a race between which player, Luongo or Sundin, plays a game with the Canucks."

That cures my hangover!

Nick Kypreos believes that Sundin may improve his points per game playing with Canucks players who are in their prime. He then mocked who Sundin's line mates had been in Toronto over the past several years. No kidding.

Taylor Pyatt broke his foot after being struck with a Mattias Ohlund slapshot last night against the Oilers. I think I would have almost preferred that it was Steve Bernier that took that shot. Bernier couldn't hit a stop sign with a snowball from 5 feet out.