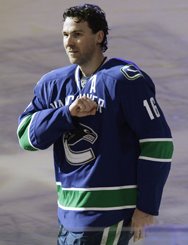 This is a big day in Canucks' history. Canucks legend Trevor Linden will have his #16 retired and there will be all sorts of festivities surrounding the Canucks-Oilers game.
At 6:00 pm the celebration ceremonies begin on Rogers Sportsnet Pacific, or you can watch it at Canucks.com. It's going to be a tear-jerking and suiting tribute to Mr. Canuck.
At 8:00 pm there will be a roundtable hosted by Barry MacDonald with special guests Dean Linden, Kirk McLean and Norm Jewison.

Linden's jersey is going to look great next to Stan Smyl's #12.

The Canucks will most likely feel the emotion of this tribute and hopefully play an ultra-inspired game against an Oilers squad that had their butts handed to them 9-2 by the Blackhawks on Tuesday night. Once again, you can expect fireworks in this game with all the emotions and the rivalry alone. Keep in mind that the Vancouver lost 3-0 to the Oilers last Saturday in an un-inspired effort. I don't see them sleeping in this one.
I'll update this post all day with any player interviews or lineup changes.

11:53 AM
Sami Salo is doubtful for tonight. Where once he had a groin issue, he is now apparently suffering from the flu...again. Sometimes I really thing we need to either trade this guy or waive him. Then he scores an OT goal against Detroit and I like him all over again. 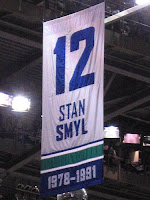 Thanks to Canucks.com for this tidbit:

On Sunday against the Panthers, the Canucks set a new team record for the three fastest consecutive special teams goals in a single period when Pavol Demitra and Kyle Wellwood tallied power play markers followed by Ryan Kesler’s shorthanded goal in a span of 2:08 during the second period.

That was pretty impressive wasn't it? Adiose Panthers!

"It’s up to one of us to take the ball. We can’t be winning one, losing one. One of us has to get on a roll. Until the coaching staff sees that, it might be back and forth."

No kidding! One of you guys get on a roll already! Yeesh!

Linden said that he was "hocked and overwhelmed" by the honor that he is about to receive. I think sometimes you just have to know when you're good, Trevor! Don't be so bashful!

In case you have lived under a rock for the past 16 days, Canucks.com has had a special on their site called "16 days of Trevor Linden. The complete archive of that can be found here. Lots of great Linden history there.

CDC has a video clip up on Wellwood too. The players love him. No, he's not the fastest skater, nor does he have a huge physical game, but he's in the right place at the right time frequently. I don't think many people thought he'd be a sniper, because he's known for his playmaking abilities. But this year he's changed that. Worth a look.

A new Gate 16 at GM Place has been intrduced in honor of Linden. The big 16 unveiled in the snowy weather today. I wonder how many city slickers won't make the game because of reckless snowy driving. Everyone take the Sky Train!
Said Linden today:

"I’m hoping to keep it together, that should be a challenge," Linden told reporters this morning at GM Place. "I’m hoping to have fun 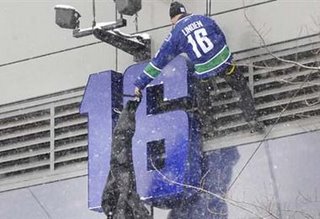