BURKE HAS A THING FOR NONIS

No doubting new Leafs GM Brian Burke's admiration of Dave Nonis... the Leafs have made an offer to current Ducks' Senior VP of Operations Dave Nonis today. We'll see what happens there.

It is becoming evidently clear that Sean Avery has no intentions of playing NHL hockey anymore.
I don't think the Stars want him on their roster, as Avery has been taken off it on the official Stars site.
Avery met with Gary Bettman and other high ups today and no sentence was handed down. 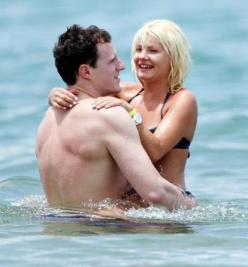 Gary Bettman will talk about Avery tomorrow on "The NHL Hour" which airs on XM Radio between 4-5 pm EST.
Avery's public apology today:

"I should not have made those comments and I recognize that they were inappropriate," he said. "It was a bad attempt to build excitement for the game, but I am now acutely aware of how hurtful my actions were. I caused unnecessary embarrassment to my peers as well as people I have been close with in the past."

"Sean got a chance to explain some different things, I think he was excellent," Healy said. "He was apologetic and from a players' standpoint, he laid out his side of things pretty well. But it's pretty clear he's sorry for the incident and at the end of the day, he's a good player. He's one of Dallas' top two forwards and he's a good kid. There's a lot of good things and he probably wishes that the incident never happened."

Oh come on, Glenn. I see your BS agenda here.
I wonder if anybody in the room needed explaining as to what the term sloppy seconds means, and if some snickering ensued. Bottom line is, Avery crossed the line, again. That stuff, like Matthew Barnaby said yesterday, is said out on the ice but not to the public.
I do agree that Avery was trying to build some hype to the game and get under Phaneuf's skin, which is a gesture I can appreciate. But there was a different way of going about that. I mean, hey, Elisha Cuthbert is a wholesome girl, isn't she?