How are financially-strapped teams going to make way for Sundin?

Share All sharing options for: How are financially-strapped teams going to make way for Sundin? 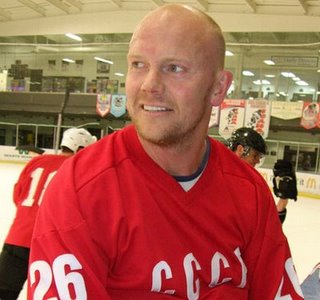 You hear it all the time: "The Rangers (for example) are going to need to move some players to provide the cap space in order to sign Mats Sundin." As much as it can seem like an impossibility in some cases for these teams to do so, teams like New York are still meeting with Sundin this weekend to discuss possibilities. So a guy like Rangers GM Glen Sather must have some form of tricks up his sleeve.
Let's focus on 2 teams that have been in the Sundin mix for the most part all along, and keep in mind that Sundin is most likely demanding at least $7.5 million per season. Pro-rated at almost the half-way point of the season, that would be $3.75 this season.

Chicago:
The Blackhawks have too much money invested in their goaltending. I'm sure they may love to flog Martin Havlat and his $6 million before he becomes a UFA next summer. I'm sure they would love to rid themselves of one of the goaltenders as well. Huet is going to have to step up his play to increase his value. Beating Ottawa 2-0 last night helps.
Khabibulin, who was listed as trade bait earlier in the year, is earning every penny right now.
According to this writer out of Chicago, the Hawks don't even need Sundin for several reasons...one is that they are hauling ass already without him.

Colorado:
With Sakic on the shelf for about 3 months the Avalanche could need a replacement.
According to GM Giguere:

"There's no way to go outside the organization and get something the equivalent of Joe Sakic," replied Giguere, who does have $5 million of wiggle room to operate under the salary cap.

It would make sense for Sundin to go there, but I think Giguere wants more out of his current team of mostly youngsters.

On to the others:

NY Rangers:
It seems that Michal Roszival is the odd man out. I don't see Sather flogging any other expensive players, especially because his top guns have no trade clauses. Roszival is earning $7 million and a chorus of boo's from Rangers fans. I would bank on no one taking him via trade or on the waiver wire. What the hell does Sather have up his sleeve?

Ottawa:
It's no secret that the Sens need more scoring. The Sens would have to make a trade to get further under the cap. The 2 questions I have are: Wouldn't goaltending be a bigger long term issue? And...What would possess Sundin to play with the Leafs' enemy from next door? I don't see it happening.

Philly:
They appear to have the hardest time with cap issues right now. They can write off Hatcher and Rathje's contracts due to long term injuries but that still isn't enough. The Flyers have been on a roll lately. Is there any reason for them to acquire another center when they already have so many? If you think that they would toss Jeff Carter then you be nuts.
Joffrey Lupul isn't exactly putting up the numbers they expected this season and he is being paid $2.9 million per season. Any takers on Lupul? Doubt it.

I have heard rumors of Tampa Bay being interested but that has to be absolute horse manure. They have too many problems in every form of the word.

Montreal:
Ooo, the big anniversary in Habsland. The Habs could ditch Robert Lang's $4 million contract to make room (who they acquired after they couldn't lure Sundin earlier, however the Canadiens are good enough to be a contender right now. I think throwing Sundin into that mix would be disruptive.
Plus...another mega-enemy of the Leafs. I don't see Mats signing there. I've always stood by that.

Vancouver:
Not to be biased, but the Canucks still make the most sense. Are we a contender? Yes. Any team that gets to the dance becomes a contender. Look at the Oilers from a few years ago. The Canucks are as much of contenders as the Rangers, if not more.
The question remains: Why do free agents never sign here?
Wellwood has been playing Well as the 2nd line center. But he would move over if Mats came in. Talk about a nasty punch at center that we'd have!
Yeah, people say: "if it was about the money Sundin would have signed in Vancouver already." Well that may be the case, but not totally. Obviously Vancouver wasn't his top pick at one point. Hell, all the pundits had us missing the playoffs. Fact is we are now exceeding the expectations of all. For the significant role that Sundin would want to play on a team, the Canucks fit the bill. We need a kick in the teeth on the PP plus another star center. Successfull teams are deep down the middle.
A little nugget from the Province today:

Read into it what you want, but a luncheon meeting Saturday between the agent for Mats Sundin and Vancouver Canucks assistant general manager Lawrence Gilman has sparked more speculation that the unrestricted free-agent centre could be West Coast bound -- at some point this NHL season.
Calgary-based agent J.P. Barry and Gilman had casual conversations about contract extensions for Henrik and Daniel Sedin and Mattias Ohlund, but they also discussed Sundin.


At the very least, when Sundin makes his choice a lot of dominoes will fall (ie: Shanahan, plus roster moves to make room for Sundin). There may be some "scraps" for us to pick up in the aftermath.

Hey, I'm just applying silly logic and creating speculation from it like everyone else is. But I will say this: In this new cap era, trades are damned hard to make, especially when so many teams are just under the cap. Any team beyond Vancouver is going to have to work some magic to sign this guy.

Sundin has told hockeyexpressen that he may go to Sweden for the holidays and will not start playing until agter December 31st.