Share All sharing options for: Hockey Night in Russia 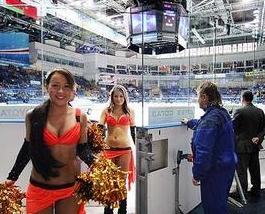 Here is a sample or two:

Vladimir Mayzel, a 46-year-old artist with lineage and hubris, leads a team of craftsmen who are building the Kontinental Hockey League's championship trophy: the Gagarin Cup.

Named in honour of former Soviet cosmonaut Yuri Gagarin, the first man in space, the trophy's designers have set what many would consider a lofty goal. They want a trophy that will put the NHL's Stanley Cup to shame.

As it is, Mayzel and his chief artisan don't have much to say about the NHL's well-known trophy. "It doesn't have artistic value," Mayzel said matter-of-factly. "They just add on new rings to have the players' names and that testifies to history and is valuable. But the cup itself is pretty plain."

Plain? Maybe. But our Cup rules all.

Excerpt 2: Mike Krushelnyski, who coaches Vityaz, knows not to ask too many questions about ownership.

For instance, what's the name of his employer, his team's owner?

"Nikolai," he said, sipping a coffee before a recent morning practice.

For more on the KHL, including video footage, check out Rick Westhead's article in the Toronto Star.