The game after a stinker and before Sundin comes to town

Share All sharing options for: The game after a stinker and before Sundin comes to town 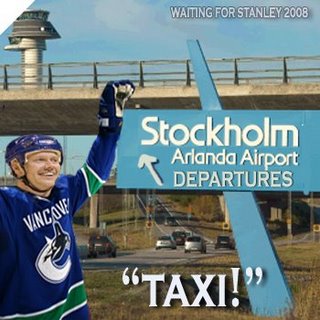 That’s definitely the tough part, getting the turkey out of you the next morning. But I think it will be a little bit easier being a home game. You get to sleep in your own bed and really enjoy the full Christmas experience and when you wake up Boxing Day, you turn the page and get ready to go. - Shane O’Brien on getting back to business tonight after the holiday break. -Shane O'Brien, Vancouver Sun.

It's not just the stuffing the Canucks have to get over, it's the 5-0 destruction the Sharks handed them on the 24th, a game they barely showed up for.
I read through some of my posts from October until now, looking for other stinker games, and the best I could come up with was the 5-2 loss to the Sabres on October 17 and the 3-1 loss to the Flames on November 29. Besides the obvious trend of the Canucks perhaps taking too many penalties, not showing up, getting outshot in those games there is another: the Canucks would lose the next 2 games after each sleeper.
But there is a more positive stat to throw out there: the Canucks are 2-1 against the Oilers this season. Both wins came at home, where they play tonight.
The Canucks have won 3 of their last 5. The Oilers only 2.
From Canucks.com:

The Oilers have won six of their last nine road contests, and head to GM Place for the second time in 10 days following a 4-2 loss on Dec. 17. Edmonton is 2-5-1 in its last eight visits to Vancouver.

The Oilers are looking to string together back-to-back victories for the first time since opening the month of December with three straight wins.

-Ethan Moreau is questionable after injuring his wrist blocking a shot against the Oilers' win over Phoenix on the 22nd.

-I know we all miss Luongo, but how about Ryan Johnson? There's a character guy that I've missed since he broke his foot and finger weeks ago.
In regards to Luongo, there is no talk of a timeline except "week to week". I talked to my cousin at the family dinner last night about groin injuries for goalies, as he plays net locally and does summer goalie camps, and he said it's a tough injury to have. He said that you can be walking around feeling fine for long periods of time and then all off a sudden you'll feel pain walking up stairs, for example. He projects 2 more weeks for Luongo. I'm not so sure about it after hearing of my cousin's experiences. 2 weeks would be terrific wouldn't it?
How about the Canucks just play better without Luongo?! They do it in stretches and are inconsistent. I hear many Canucks fans wondering if we should be getting a different backup goalie while Luongo is out. My opinion on that wanes. How about the team plays better? Curtis Sanford looked great in relief of a rubber-stricken Cory Schneider last game. How about the coach rides Sanford for a while and the team buckles up in front of him?!
It's Friday today but it feels like Monday, why? Because it's a big week in Vancouver. We play 3 in a row at home against the Oilers, Senators and Flyers. The team needs to establish some form of consistency in Luongo's absence and while Mats Sundin practices with the team yet does not play. He reportedly arrives tomorrow.
Distractions everywhere. Focus boys!

Good for them. I know many long suffering Canuck fans who seemed to be on the edge of a dream before a Jovo dumbkoff penalty or Bertuzzi the Brave decided to alter time and space. Perhaps no fan group in the NHL deserves a Stanley Cup more than Vancouver.

And you know what? They might just do it. - Lowetide