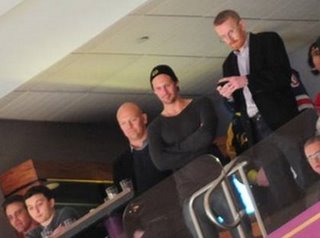 THE FAN 590's Bob McCown is reporting that former Toronto Maple Leafs' captain Mats Sundin has decided to join the New York Rangers. McCown's source, who has intimate knowledge of the situation, expects this decision to made public later this week. The folks at the CDC forum are saying that JP Barry has denied that claim, but no credible link to that denial is present.
Larry Brooks reported a couple days ago that

Sundin, who met with GM Glen Sather and selected members of the hockey department in New York this weekend, left the Garden with pals Henrik Lundqvist, Markus Naslund and Fred Sjostrom after watching Saturday's shootout victory over the Hurricanes from a suite.

Is Markus Naslund finally going to get his wish?

"I do not know much about it and I do not know how he thinks. But I hope he is thinking of the Rangers as an option in all cases."

-Naslund told Hockeyexpressen this past weekend. So he hangs out with him but knows nothing? I doubt that.

There had been speculation that Sundin had already made his decision and that he was about to sign with the Rangers, however Barry dismissed the rumours.

"No decision has been made," Barry told TSN. "(It is) inaccurate speculation."

McKenzie apparently wrote that at 5:23 PM I would think EST. The Fan 590 is still quoting McCown right now that Sundin will sign with the Rangers. Good ol' rumorville.

"Mats' focus is now on these two clubs, the New York Rangers and Vancouver Canucks. We are about to collect the latest data to the decision-making Mats wants before he decides, "said JP Barry.

Vancouver already offered in the summer, one year's salary of 80 million, what the Rangers want to pay?
"It is one of the things we are discussing with the Rangers right now. They must clarify to us what they are willing to pay the salary for Mats.
When can we have a definitive answer?
"My guess is that it will later this week."
Sundin has to decide before the weekend?
"No, not really. But the NHL's Holiday Voices Freeze comes into force on Friday and runs until Dec. 27. During that time, no player transactions made."
Mats can be verbally agreeing with a club and then write the contract on December 27He will still not play until then.
When can Mats earliest to be back on the ice in the NHL?
- "Some time after Dec. 27, maybe it takes until after the New Year. He wants to safely practice on ice with his new club for a week before he plays first match.
But Mats is physically in top trim after this fall's tough workout, so it is more about driving on ice with his new teammates."

Toronto Star (like I should trust anyone from out East right now):

Mats Sundin is expected to finalize his playing future as early as tomorrow.

Sources in Sweden say his Swedish representative – Claes Elefalk – has told media in Stockholm to call tomorrow to learn which team Sundin has chosen to continue his NHL career with.