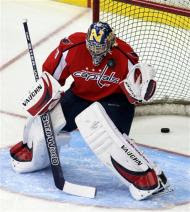 A six-foot-seven website producer for the Washington Capitals prepared to dress as the team's backup goalie for Friday night's game against the Ottawa Senators because of an injury to Jose Theodore.

Brett Leonhardt, who played Division III hockey in college, signed an amateur tryout contract before the game. If he were to actually get on the ice, he would tie the record for tallest goalie ever to play in an NHL game.

Theodore suffered a hip flexor injury during the Capitals' morning skate, and Simeon Varlamov was recalled from Hershey, the team's AHL affiliate, to back up starter Brent Johnson.

But Hershey happened to be on the road in San Antonio, and Varlamov's plane wasn't expected to land in the Washington area until close to the 7 p.m. ET game time.

So the Capitals received special dispensation from the league to dress three goaltenders. Varlamov was to take Leonhardt's spot on the bench upon arrival.

Remember the last time something like this happened? Canucks fans may know.

It's a similar situation to the one faced by the Vancouver Canucks in December 2003. After starter Dan Cloutier suffered a groin injury just before a home game against Pittsburgh, the Canucks were forced to call up Chris Levesque - the third-string goalie from the University of British Columbia.

He was on the ice for warmups and backed up Johan Hedberg, but never appeared in the game. Levesque returned to his university team the next day.

It may never happen, but I wish one time one of these emergency backups would actually be forced into the net just t see how they would hold up. Hell, records could be made! 30 shots against, 29 goals let in...


"It was a great view. Usually I'm up here with you guys in the press box," Leonhardt said. "Mike Green started laughing his head off."

During the first half of the first period, Leonhardt sat at the end of the bench in a white baseball cap. He looked down sheepishly when shown he was shown on the huge replay screen along with the caption: "1st NHL game." The crowd roared. -AP

As an emergency backup, Leonhardt now makes the Capitals team on their website.

Apparently, Leonhardt, who works with the Capitals media, has donned the mask and pads for the Capitals before when Kolzig was injured.