Share All sharing options for: Canucks vs Ducks preview 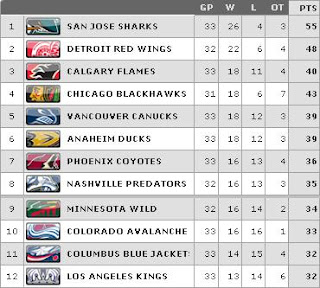 One look at the standings and once again you can see how an important a win could be for the Canucks tonight. We're either going up or down the list tonight.
There isn't much about htis squad minus Luongo that really brings out the confidence in me right now. When Sanford showed up to play against the Blackhawks on Saturday, his team couldn't score more than 1 goal on a nearly flawless Huet. Look at how the Devils are playing without Martin Brodeur.. why can't we do that? Is it fair to say that Sanford is no Scott Clemmenson? I think it's fair to say that every player to a man needs to step it up.

- J.S. Giguere will be back in net for the Ducks tonight after attending his father's funeral in Montreal recently.

- No Teemu Selanne, who cut his thigh against the Oilers last Friday. I thought I saw blood on the ice. He will miss a month.

- the Ducks have not lost a game this season when leading after 2 periods. The Canucks have a .846 record. Remember when we were gold in that category? The Ducks and Canucks look to match up pretty evenly otherwise if you look at Canucks.com's preview.

- Daniel Sedin missed practice on Sundin..I mean Sunday with a sore groin. He is expected to play tonight. I hope..

-Brendan Morrison returns to Vancouver tonight, but the big story on him is his lack of offence.

- Is it just me, or did the Sedins and Ohlund have that extra zip to their game against the Hawks? Gee I wonder why...

- Call me nuts call me Zany but I think the Canucks will take this one.

-Just to bring back a Waiting For Stanley Photoshop blast from the past.... 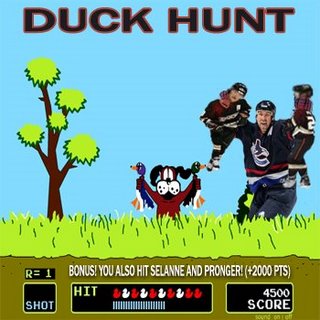