Share All sharing options for: Canucks remedy some issues but create new ones in loss to Columbus 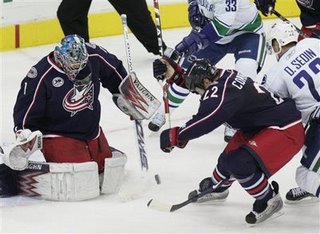 It's one thing to say that the Canucks are bound to lose a few games after a long undefeated streak, but this is a game they should have won. The 2 goals they scored were on the power play, which remedied that issue, mentioned earlier. But for 3 guys to try take the puck off Nash, who then slid the puck to the Kristian "The Weasel" Huselius for the winning goal, was a complete blunder. The breakaway miss by Daniel Sedin became costly.
All of the hype surrounding rookie Cory Schneider may now have come to a halt. He looked pretty good most of the time, but fell off balance for the tying goal by Andrew Murray. The other 2 goals he could not be faulted on. I thought he seemed a little bit "off" though. There were times where he came far out of his net to make a save and then looked completely out of position. At times I thought he looked slow moving left to right in his butterfly stance. He let out a lot of crazy rebounds as well. His teammates may be having a hard time reading where those rebounds are coming out.
Kyle Wellwood improved as the game went on. He turned the puck over twice earlier in the game and the Jackets had great scoring chances as a result. But then Woody scored the Canucks' first goal and created more chances after that. At least he is making good on his promise to win one for Schneider. Unfortunately, most of the other guys are not helping.
32 shots to 29 in favor of Vancouver. That was a remedied problem as well...getting more shots. Unfortunately, the Jackets are coached by Hitchcock and limited most of those shots to the outside. Other than that, Steve Mason looked pretty great in goal for Columbus...especially robbing Wellwood with seconds left.

Opinion 1: I know Taylor Pyatt is improving his all-round game, but was it necessary to put him on the top line? That was a hunch by Vigneault that did not pay off.
Opinion 2: I thought the Raymond-Jaffray-Brown line played terrific, and deserved more icetime than the 9:44 - 5:50 - 5:18 icetime that they received respectfully.

Curtis Sanford left the game with back spasms after stopping 11 of 11 shots. He was looking pretty solid up to that point wasn't he? Bummer. Hopefully he'll heal up over the next 3 days. The schedule doesn't get easy from there: Detroit on Thursday and Minnesota on Friday. Yikes. Suddenly these losses don't seem kosher. Remember the ideal plan: play at least 500 hockey in Luongo's absence.....