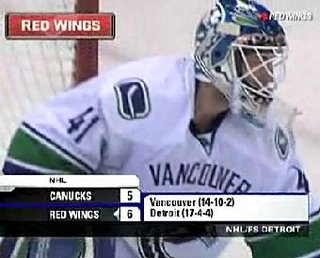 Sure, you could say it was a close game as the Canucks battled hard in the second half of the 3rd to almost tie it. But it was a complete brain cramp by the team between the 3:23 and 6:08 mark of the 3rd period that really did them in. The Wings scored 3 goals in that span, cushioning their lead to 6-3. Too much of lead for the Canucks to come back from.
It was a whacky 3rd to say the least, as 5 goals were scored.
I don't think I can count how many things went wrong for Vancouver tonight.
-coughing the puck up
-taking too many penalties (7 minors to the Wings' 4)
-taking penalties at the wrong time (Ohlund's hooking call because he couldn't match the opposing player's speed at the 18:42 mark of the 3rd, spoiling any chance of a miracle comeback)
-where Curtis Sanford started strong, he couldn't stone the Wings when it counted. He completely gaffed on Derek Meech's wrap around goal.
-the Nucks were outshot 17-8 in the 2nd period and 38-25 overall. I'm surprised this game was even close.
-Steve Bernier has only 1 goal in his last 13 games. Yeah. Didn't see that coming.

-Sanford played very well up until the 3rd.
-The Wings only scored 1 PP goal
-Datsyuk: 5 shots and no points
-Zetterberg: 3 shots and no points
-Hossa: 7 shots and 1 assist
The Canucks kept the big guns off the board, but in the end Detroit had too many weapons on this night.
-Kyle Wellwood only received 10:37 of ice time. In that span, he coughed the puck up for the Wings' 2nd goal, then scored a power play goal, and also almost scored a highlight reel goal in the 3rd. He was good.
-Love seeing Mason Raymond score. Same with Burrows.
-Taylor Pyatt has gone from a pylon to a demonic force over the past couple of weeks. I liked his play at both ends of the ice.
-Why is everybody bagging on Shane O'Brien for taking minor penalties? Let's pick on the team as a whole. O'Brien isn't the only guilty party.
-AV put Demitra back with the Sedins. I like that combo. Phd, baby.
-We don't play Detroit again until the 2nd or 3rd round of the playoffs! (Ooo...jinx)

The Canucks have lost their division lead to the Wild. A scary scenario: They are 4 points ahead of the Coyotes who are in 9th place. Thank Luongod they won all those games in November, because December is turning into a month not to remember.