Share All sharing options for: Canucks 3 Senators 0: Canucks improve and Sens get worse 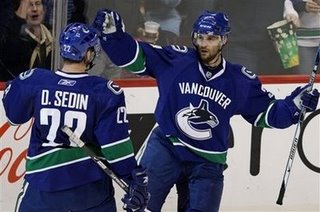 Everyone's been asking about us taking too many penalties. Tonight we responded physically and kept it within the rules.
-This was one of our best defensive games in a while.
-We played hard for Sanford because we know he's been playing his guts out out there. -Shane O'Brien


The Canucks outshot the Senators 32-18 tonight, including 9-7 in the 3rd. Why? Because the frustrated Sens took a lot of penalties, where the Canucks took less. Tonight's 3-0 drubbing of the Sens was a combination of the Canucks' excellent effort AND the Senators' lack of it.
Lots of talk about the chemistry between Demitra and the Sedins post game. It makes me wonder why Alain Vigneault doesn't always have him playing with Dank and Hank. I think AV wants to spread out the scoring more on most nights. Those 3 accumulated 6 points tonight. If the Canucks play a team that is deeper on offense, then maybe that combo wouldn't be a great idea. This is where Sundin is going to help out greatly...depth up front.
Vigneault just mentioned that he plays players more if they deserve it. I guess he doesn't always feel Demitra earns a top line spot? It also depends on how physical the opposing team's defence is.
Demitra was absolutely terrific. 1 goal 1 assist, 4 shots. He was a force out there, even in the 'small' areas, liking keeping the puck in the opposing team's zone while on a power play. He was the go-to guy tonight no doubt.
Jason Jaffray said pregame that he knows it's going to be tough for him to keep a roster spot with Sundin and Ryan Johnson coming into the lineup soon. But he wants to make the decision 'tough' for management to send him back to Manitoba. Once again I though Jaffray played really well tonight in Pyatt's place. I would almost go as far to say that I'd prefer Jaffray in there over Pyatt anyway.
By the way:
Alfredsson had 2 shots and was a -2 tonight. 17:45 of icetime.
Dany Heatley had no shots and was a -1. 19:38 of icetime.
Jason Spezza had 1 shot and was a -1. 21:36 of icetime.

How important was this win? Check out the standings.
I'm loving the effort by Sanford tonight. Let's ride this guy until Luongo comes back. And let's hope the Canucks can continue this style of game against the Flyers. It's going to be a tough task against the Bullies.

Canucks.com will be streaming the Canucks' practice on Tuesday at 10:30 I believe. Who's going to be on the ice? Mr. Mean Mats Sundin! Or, Baldilocks and the 3 Swedes, as Temujin and the Humming Giraffe put it on the Canucks.com Live Chat board tonight.