Are the Canucks the Flyer's b**ch?

Share All sharing options for: Are the Canucks the Flyer's b**ch? 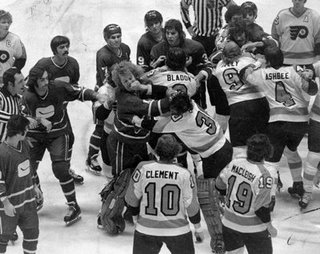 At this point, yes they are. As CDC puts it, the Flyers have not lost in Vancouver for nearly 20 years. The Flyers have an unbeaten streak in Van of 13 (9-0-4) since their last loss on January 18, 1989. When we lose to Philly, it's been ugly. The Yankee Canuck points out the 8-2 smoke show on Octber 11, 2007.
Check out this amazing Flyers-Canucks historical piece at the HF Boards Game Preview. Wow.

Some positive news from Canucks.com though:

But the Flyers haven't been as sharp in the first two contests of their current trip, falling 5-1 in Chicago on Friday and enduring their first shutout of the season, 3-0 at Columbus on Saturday. They've been outshot by a combined 71-38 in those contests.

Now would be a good time to erase this domination, Luongo or not.
The Canucks rolled over the lifeless Senators on Sunday and showed a lot of character and character in doing so. That same effort and more will be needed against a Flyers team that can be explosive at any given time. Philly has the best power play in the NHL right now. And Jeff Carter...26 goals and 41 points in 36 games. He has arrived. The Flyers have more firepower than just Carter however.
Maybe Sundin's presence will motivate the Nucks. You know the Swedes will be rolling. Maybe it will distract some of them. Maybe Sanford is going to continue his great play and this team will rally around him.
The Flyer streak must end tonight.

Canucks.com is live blogging again. Great times last game versus the Sens!
I will not be a moderator tonight. I am recording the game and watching it later.