Wings' power play proves too much for Canucks

Share All sharing options for: Wings' power play proves too much for Canucks 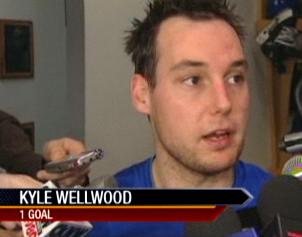 The Canucks could have won the game....had they not taken any penalties at all. Detroit scored a power play goal in each of the first 3 man advantages. And that was the big difference. Penalties happen. The Canucks weren't penalized all that often. It's just that they couldn't kill the Wings' man advantages.
And oh, did Vancouver ever come close to tying it, out shooting the Wings 13-3 in the 3rd and being fueled by King Kyle Wellwood's goal to make it 3-2. So close.
Speaking of Wellwood, I find it very strange how he is always left by himself by the net when the Canucks are on the PP. Why is that? It's almost like the other teams don't give him any respect either. No love for the Wood. But that's ok, because he'll just keep scoring those kinds of goals, and I'll keep laughing. Maybe, just maybe, Wellwood should play on the first line.
His ice time continually increases. Over 17:00 minutes tonight. Good stuff.
There really isn't much else to say except:
- the refereeing sure can be ass sometimes. There were bogus calls on both teams tonight. Lame.
- I thought the Canucks played alright despite the loss. At lot more of a controlled game. 5-on-5 we can tango with Detroit.
- were we 0-for-7 on the PP tonight? Brutal. That should drop them down towards the league basement now. Something's got to give.
- 2 shots and 0 points for Hossa. Impressive coverage.
- I really miss calling Luongo "LUONGOD". He has not really stole a game yet. I wouldn't say he had much chance on the Wings goals tonight however.