Wellwood 2 (plus 2 other Canucks goals) Preds 0

Share All sharing options for: Wellwood 2 (plus 2 other Canucks goals) Preds 0 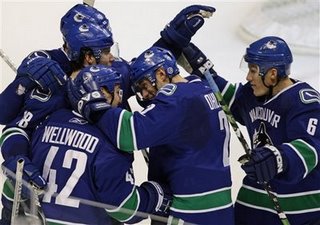 Continuing on with Wellwood week here at Waiting For Stanley...
Yeah, nothing like The Wood erasing the Canucks' PP woes on his own. Love it.
Wellwood is no longer a secret. He is no longer an overweight disgrace. He is no longer that poor kid on the bus that got picked on throughout his elementary school years. No, Wellwood is a god.
-Wellwood manged 2 goals, both on the power play with only 12:28 of ice time.

-Good to see Luongo play as well as we expect him to.
-The Canucks outshot the Predators (while having a 1-0 lead) in the 3rd period 13-4.
-Domination.

-Michel Ouellet was invisible on the 2nd line and the first line whenever opportunties arose. But it was his first game as a Canuck. He saw limited special teams ice time and played only 10:26.
-Wellwood. That's right...chant his name. That's 4 goals and 1 assist in 7 games. Demitra WHO??? Ray Ferraro (bless his heart because he is one cool cat) was saying that the Canucks really miss Demitra to kickstart their power play. Then Wellwood responds with 2 PP goals.