Too much happening in Canucks vs Penguins game: Luongo injured; VICTORY!

Share All sharing options for: Too much happening in Canucks vs Penguins game: Luongo injured; VICTORY! 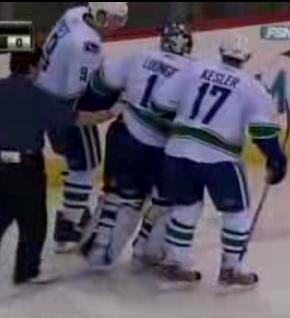 We've seen Luongo fall to the ice like he was dying from a gun wound in the past. Then he'd get up. Not today. A Penguins player shot the puck from the point and it went off Willie Mitchell's skate. Luongo was in the butterfly position on his knees and made a a quick kicking motion left and then right while the puck was deflected. Then he crumbled forward onto the ice. Hello Mr. Groin Injury. He was helped off the ice and put no weight on his left leg. He is done for the night. Here is the footage on the injury.
Like Garrett and Shorthouse were saying: "Good thing Sanford played in the previous game against the Wild so that he's not going in cold. He looks sharp and the Canucks are up 1-0 on a goal by who else, Pavol Demitra. And a great little goal that was.
So now we wait and see how bad the groin injury is. As much as this is a freaky thought, the Canucks have goalie depth and I can say I trust Sanford and "friends", because you know who else is out there beyond Sanford, right?
Mitchell was just saying to Dan Murphy in the 1st intermission how he hadn't thought about the Luongo injury because he was killing penalties all period. No kidding.
Damn. I may not see Luongo play live against Detroit on Monday night....bummer thought.

Update:
The Canucks trainers told Dan Murphy that Luongo is in good spirits and that he was joking around with them. Maybe that is a good sign. I am going to guess that Luongo will be listed as day-to-day.

-Well the Sedins-Demitra line (or, the PHD Line) continue their dominance. Dank Sedin just charged in front of the net and made it 2-0 Canucks 6:50 into the 2nd. This is great. Good to see the Twins have found a sister. Love it.
The Penguins have not even had a shot yet, oh wait that stuff attempt counted.
-12:00 in and the Penguins don't have a 1 shot. If Rangers fans are cruel, Pens fans are passive...or optimistic. Like John Garrett said, the Penguins are (I believe) 6-3 when trailing after 3 periods. Wow. They are 5-1 when trailing after 1 period. This game is far from over.
-Well there is some impatience shown by Penguins fans, as the Canucks handily kill off a Penguins' power play to end the period. Very noticeably, Ohlund and Mitchell are playing stellar defensively, as are Burrows and Kesler.

-Uh-oh. 22 seconds in Mike Zigomanis scores a weak one on Sanford. 2-1. Maybe John Garrett was on to something. This period is going to be stressful.
-10:00 left and it is stressful. The Penguins are coming on but the Canucks are holding them off. I really like Ryan Johnson at times like these. Good shutdown guy.
-5:00 left....the Canucks are loading up the middle and forcing the Penguins to the outside. So far so good...
-LUONGO UPDATE
The folks at CDC are saying that Team 1040 is saying that the Luongo injury is a groin injury and that it is not that serious.
-3:00 left. The Canucks are so good 5-on-5 that I think the only way Shittsburgh ties this is if the Canucks take a penalty and/or pull their goalie. I have a lousy feeling the refs are going to make a lousy call against us pretty quick, even though they have completely put their whistles away in the 3rd.
-2:00 left. Great composure shown by the Canucks...except they are getting away with trips and hooks right now. Maybe the Penguins are diving.
-1:00 left. Pens pull Sabourin...Ohlund decks Talbot hard into the boards, puck goes out of the zone and Pavol Demitra scores into the empty net! WOOOOOO! Great play by Ohlund. That was sick.
GAME OVER! Canucks 3 Divers 1!!! Listen to the Canucks hollering in exuberance coming off the bench! Love it! These guys are on a serious roll. Every Canuck surrounded Sanford and congratulated him after the game. Special stuff.

5:00 after the game is over and I can still hear the Canucks hooting and hollering!

-The PHD line accounted for all of the Canucks' goals: 2 goals for Demitra, 1 goal and 2 assists for Dank, and 3 assists for Hank. Wow. Yes, Golbez, Demitra continually impresses me, not just because of his scoring, but also because he's playing a good 2-way game. 9 points in 5 games for Demitra now.
-Fairly quiet game by Wellwood. About 11:00 played and no shots or points. Not many power plays for him to play on either.

"It's very disappointing, frustrating," Luongo said. "We've been playing great as a team and I've been really happy with the way my game has been in the last few weeks. It's really disappointing to have something like this happen.

"The schedule has been pretty brutal here the last week or so. I don't know if that had something to do with it or not. Tough to say."

So much for Luongo joking around and being in good spirits. He will be evaluated in Vancouver. Louie has never suffered a groin injury in his NHL career. Hell, Luongo rarely ever misses any time period.
Nick Kypreos heard from his source that Luongo felt a "pop" and that isn't a good thing. I'll hold off on further speculation until the Canucks release an update.
The Canucks will go with Sanford and Schneider from this point forward. To me that is a good thing because of how they could prove themselves in this opportunity.