Rangers Fans! Where are you going? You paid $300 for those tickets!

Share All sharing options for: Rangers Fans! Where are you going? You paid $300 for those tickets! 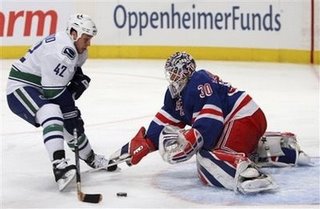 6-3! Ah, to quote Sir Squire Barnes from after Game 5 of the Finals in 1994!
Lundqvist chased from the nets?
Wellwood is gold?
What a game!

OK, let me be half-assed drunken serious for a minute..

Let me start with the bad:
This Canucks team does nothing to make me feel confident that they will cling to a lead and win a game like they did in 2005-06. Alain Vigneault had the Canucks put 2 forecheckers into the Rangers' zone with a 5-2 lead when I thought they should trap and frustrate the Rangers' attack. Insane. How many great chances did the Rangers get when we were up by 3? It's fucking dumb. Defensive hockey wins more than it doesn't IMO.

Mike...was that you chanting Luuuuuuuu out there? I swear I could hear you from your limited view seating. Luongo was so great early on. Sure he didn't look as stellar in the 3rd but that is not the point. The Canucks did not play as well in the 3rd. Hell, they were outshot 17-5. You can attribute a lot of that to Shane O'Brien, who must have thought he was playing in an Irish league. He took 6 minutes in penalties between the near-end of the 2nd period to the 3rd period. That fucker could have costed us the game. Alas, the Canucks prevailed.

Kyle Wellwood and Alex Edler led the Canucks in shots on goal. Difference is: Edler played 24:48 and Wellwood played 12:52. When oh when is Wellwood going to get the proper respect that he deserves? Demitra played 17:11 and he, as well as the Sedins were not that impressive defensively. A big difference between Woody and Pavol is that Woody makes a great pass whether he is going to get hit or not. Demitra is a chicken shit who turned the puck over often, and I will stand by that opinion no matter what. Look at Woody: he was boarded TWICE and never quit. Gutsy little bastard.

On to the good
Markus who?? Tom Renney gave Naslund every chance to be a difference maker in this game. Naslund played over 22 minutes, had 1 assist and 3 shots. What I saw from Markus tonight was nothing different than what he gave us in Vancouver for the past couple years: perimeter-useless hockey. He hit Mitchell behind our net, shockingly....I wish someone could have decked his sorry arse. All I could think of in this game as far as Naslund goes is: "Hey a**hole, look at us now! 6 goals for to your piddly 3 goals against. Enjoy New York..f**khead. Harsh? Yes. But I don't rattle my keyboard to please any Nazzy-lovers.

Well, Mike, you saw Wellwood play live. You must be appreciating him by now right? What a game by Woody.

For the record: The disallowed goal for the Canucks was justified. It really was inconclusive. It was great to see Demitra cash in on the 5-on-3 just after the goal was disallowed. We needed that.

Yes, the New York media was right: the Ranger fans really don't like Michal Rozsival. Nasty stuff. Like the TSN guys were saying: he didn't even want to touch the puck after the harassment from the (un)faithful MSG crowd. Maybe the Rangers fans are worse than us after all. It was crazy to see the hate first-hand.

A 6-3 win for Vancouver. Suck on that Rangers media. You and your team got what you deserved for that pre-game bullshit you published. Especially you, Stan Fischler.