Share All sharing options for: My Canucks-Wings game experience and the meeting of 2 NHL stars 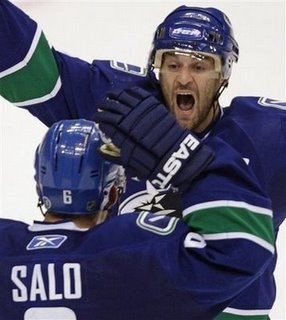 What an eventful first 24 hours in Vancouver.
Temujin and I were in section 109 row 14. The Red Wings were practicing and warming up on that end prior to the game. That was fine by me. I hate the Wings, don't get me wrong, but to see superstars like Datsyuk, Hossa, Zetterberg, Lidstrom, Rafalski that close (we stood behind the glass to watch them practice) was a real treat. Sure, they are the enemy, but being from a small town in northern BC, far away from this stuff, I couldn't help but respect the talent on the Wings team first hand. Datsyuk's pregame routine was stick-handling the puck around the face off dot over and over again. Osgood stood to the right of his net with his head down...concentrating and focusing.
Once the puck dropped, the respect was gone. Then it was 'die Wings die!' And what a game. You could really feel the life get sucked out of the building when Datsyuk scored the 2-1 goal with 3.5 minutes left. That feeling of: "oh shit, we're done."
But man did the place erupt after Dan Sedin's ping pong goal a minute later to tie it.
Then you could tell that the Canucks were not going to let this game go to the shootout. Hell, we didn't want it to go to a shootout either. Not with that firepower on Detroit. A Franzen penalty in OT helped. Demitra to Glass Salo (or Sally Samo, as Scott Rintrout called him by accident) and bawango, a one-timer goal. That was right in front of us. Our whole section jumped up in jubilee before anyone else did. And my god, did GM Place freak out! I think I spilled my beer on the couple in front of me. Shit, we were screaming at the top of our lungs and jumping up and down! What a game, what an experience. What a great effort by a Canucks team that looks so damned confident in their system right now, regardless of who is playing in net.
I believe Temujin will have some pictures posted soon, and his own stories.

I haven't even mentioned who we ran into in Vancouver yet. One was a Canuck in their 1994 run, sitting in the club seats...Dave Babych. Hardly anyone recognized him. He was sitting about 6 seats to our right. I say to Temujin: "Man, see that guy? That's Dave Babych!" Jin didn't believe me. Neither did the old lady sitting next to me. She said: "No that's not him. Dave has broader shoulders than that!" But she got her friend to go up to him and ask. "Yes I am" replied Babych.
We waited until after the game to approach him. I shook his hand and said that Willie Mitchell's style really reminds me of his because both are such reliable defencemen. I also said something about him playing heroically in 1994 for us. He said "you guys really enjoyed that game didn't you?" Well, yeah, we did. We were being as loud as possible in an otherwise lame and quiet crowd, which I will get into tomorrow. Speaking of, Babych did not clap or cheer or even stand up when the Canucks scored in OT. Strange.
We met several Wings fans around town after the game and they were quite pleasant. Most of them were from the States. We walked into the Lennox Pub and a guy ran up to me and said "yeah man! I love that shit! Wooo!" He was referring to my Canucks jersey and the game. High-fives. Walk up to the waitress...high fives. Then we sit down and who is sitting to our right? 2 Wings fans wearing Wings jerseys...looking pretty gloomy. Ah good times. These guys were cool though...very knowledgeable about hockey. One was from Seattle and the other from Michigan.
Anyways, we stumble out of the hotel late this morning and head to Red Robins for lunch. And just before we get there (corner of Robson and Thurlow I believe), we walk by this guy wearing a toque and a brown jacket with his young son, staring at a store window. Who is this guy? Pavol Demitra! Temujin doesn't even realize it. Hell, no one did. He was all by himself with his kid. So I stop, give him a "nice-work" kind of hard pat on the shoulder, and point at him. Then I kept walking. I say to Jin, "Hey man, that's Pavol Demitra back there!" Jin turns around and can't believe it. He said that Demitra was smiling.
I am not an intrusive person. In hindsight I would have loved to have said at least something to the guy. But what was I to say? Here is a guy I have been bashing for months now and there I am standing face-to-face with him. I wasn't going to blow smoke up his ass. That would be hypocritical of me. But I must say, Demitra is playing a 2 way game so well right now and he continually grows on me. Perhaps I wish I would have said that. Nope. Just a pat on the shoulder and a finger-point at him. He knew what I was getting at. I smiled when I did it.
Good times. To meet Babych and Demitra in a 13 hour span is insane for a country boy like me. No pictures taken. No autographs. I'm just not that kind of guy. To me, neither moment seemed right. Both guys seemed content incognito. Damn it, I just may regret being so thoughtful. But the moments will live in my mind forever. That's the most important thing.