Luongod leads shutout poll and earns player of the week

Share All sharing options for: Luongod leads shutout poll and earns player of the week

Yeah, it has been a hell of a 3-game ride for the Canucks, with Luongo recording shutouts in every game. The team plays better in front of him more consistently right around the same time and bingo bango bongo. Luongo will attribute a lot of his success to his teammates in front of him, but let's be honest here, Louie has made countless great saves during his streak.
Now, it appears everyone is hopping onto the Luongod wagon. The following poll is from NHL.com. 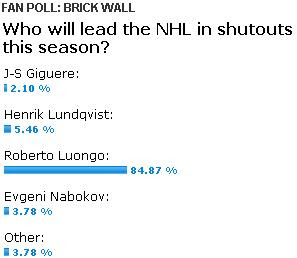 To top it off, 3 goalies were named the top 3 stars of the week. Luongo was on top, with the Jackets' Steve Mason and Capitals' Brent Johnston trailing.
Ah, times are good indeed.