Share All sharing options for: Jason Blake questions future with Leafs after benching 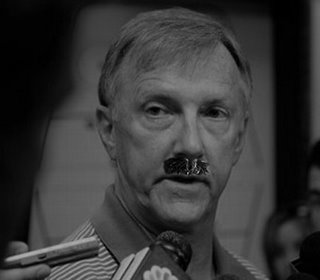 No player with any form of competitiveness likes to be benched. I always get a kick out of what the player says when he does ride the pine and how he responds on the ice afterwards. Yesterday, Blake said:

"Maybe it's not meant for me to be here," Blake said yesterday after a Leaf practice here before the team headed to Edmonton. "It obviously hasn't worked out in the year and 16 games we played here.

That's hilarious. I can tell you where you'll play if not in Toronto, Jason.... the minors. At $4 million per season, Blake has not given the Leafs the kind of consistent offence that they intitially paid him to put out. "I'm glad he's upset," said coach Ron Wilson, who has coached Blake on Team USA.

"You don't want a guy to roll over and die. I want him to step on the ice, and play with piss and vinegar, which he hasn't done consistently."

I love this coaching by Wilson. He pulls no punches. He punishes those who sin. The Leafs have needed a Hitler for a long time now. Nobody is safe from being benched in Toronto these days.
Blake is a guy who put up 40 goals and 29 assists in his contract year with the Islanders, and then recieved the raise from the Leafs. In the previous couple years he averaged about 22 goals and 50 points. His first season with the Leafs (last season) he scored 15 goals and 52 points in 82 games. I'm starting to see a trend here. An overachiever in a contract year. God I hate those players.
The Islanders must look at this and laugh, because at least in this scenario they were potentially smart in letting Blake go. When can you ever say the Islanders' organization is smart?
Well, let's see how Blake responds. I'm guessing the inconsistency continues, as he has been benched twice this season already. This situation has fireworks written all over it.
In some form of credit to Blake, he was diagnosed with leukemia last season yet didn't miss a game. That's gutsy stuff, and I recognize that. But you can see that he has the skills to pay the bills when he plays and needs to find his scoring touch back regardless.

More on the story at the Toronto Star.