How much longer can Luongo shut the door? Avs-Nucks Preview

Share All sharing options for: How much longer can Luongo shut the door? Avs-Nucks Preview 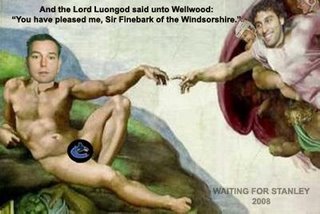 (Yeah, what the heck, I had to bring back that Photoshop image and put Woody's head over Pyatt's. And no, I did not come up with Sir Finebark of Windsorshire either. That was a combo of the brilliance of the Yankee Canucks and Temujin.)

I'll add to this post more as the day goes on. What I really like about Luongo's streak, besides the obvious fact that it's badass, is that the team will play so well in front of him to try help hm achieve a shutout record. That bodes well for Vancouver tonight.
Unfortunately, what could happen is the Avalanche score early and then the wheels fall off the team machine.

From TSN: Jannik Hansen will return tonight after missing 4 games with a groin injury. That line has not scored since Hansen left due to injury. Imagine that.
No Demitra yet. Yay.
Even better: NO JOE SAKIC! He has a sore back. This is terrific news!

How far into the first period do the Canucks have to get without allowing a goal for Luongo to start setting records? According to Canucks.com:

More on that here.
Luongo is downplaying the shutouts, naturally.

I don’t think shutouts get you into the playoffs. The win is what matters the most and going into Wednesday [against Colorado] I’m not really concerned about that [shutout]. I’m concerned how I’m playing.

That is what he told the Province. Ah, BS! Louie's a gamer. You KNOW he's got this streak on his mind.

The Avalanche owned the Canucks in 8 games last season. They won 6 of them, outscoring the Canucks 24-11 in the process. But this Avs team is different. Gone is the more consistent goaltending of Jose Theodore. They sit last in the Northwest Division, 5 points behind the Oilers. They are 14th spot in the West, 1 point ahead of the Blues. These guys are praying for Peter Forsberg to come back to them.
The Avs have lost 4 of their last 5, being outscored 18-9 in the process. Poor Tony Granato must wonder if he's cut out to be an NHL coach in his second tenure behind the bench.
So it looks positive for Vancouver tonight, unless we come out completely flat.
I say we win about 4-1.