Canucks Wings duke it out at GM Place tonight

Share All sharing options for: Canucks Wings duke it out at GM Place tonight 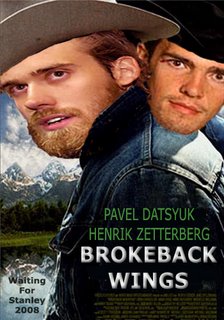 The Canucks return home for 6 games, but tonight they will be without the services of Jannik Hansen, who suffered a groin injury against the Ducks. That's quite unfortunate, as he was clicking well with Kesler and Burrows, scoring 3 goals and 7 points in 7 games. Jason Krog will take Hansen's spot on the 3rd line. Maybe there will be some chemistry there. We'll need it.
While the Canucks are now 4th in the NHL in goals for, Detroit is second. Are we going to see a goalfest again? Probably not. You would have to think that they will tighten up and play Detroit very hard as they always do. Why, on October 16th of this season, the Wings outshot us 35-29 but Alex Burrows scored the winner in overtime. I can remember being pretty happy about that. Burrows, Kesler and Hansen combined for 4 points. The Sedins had a combined 3 shots and no points.
Vancouver will have to take less penalties than they did against the Ducks, or Detroit will bury us. Their firepower is sick.
So what have the Wings been up to besides eating Octopus dung?
Their last game was on Thursday against the Sharks, and that was a 4-2 loss. On Wednesday they lost in OT to the Ducks. So they have lost 2 in a row. Love it. Ironically, they had won their previous 5 straight after losing to guess who...yeah the Vancouver Canucks. So you know the Wings want to get back in the win column and are plotting revenge against us, which makes it that much more crucial that Luongo plays like he's going to steal a game (for once), the team doesn't take too many penalties and they play a little more sound defensively. This is a broken fucking record isn't it? Oh, and somebody shadow Marian Hossa. He's on a roll with 3 goals and 6 points in his last 4 games. He leads the team in scoring with 15 points in 11 games, and remember, he started slowly out of the gate. Now he's looking to put up 100 points.
Regardless of how great the Wings are, how about the Canucks beat the hell out of them tonight?
Die Wings Die!