Canucks vs Leafs: My favorite game of the season!

Share All sharing options for: Canucks vs Leafs: My favorite game of the season! 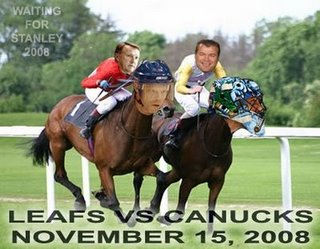 Sure, Mats Sundin no longer plays for the Leafs and the team is rebuilding, but I don't think the Canucks-Leafs game will lack intensity. It could/should be a war. There is still going to be blueshirts scattered all over GM Place. That atmosphere will still be present. The Leafs have not played in Vancouver FOR 3 YEARS! Good gad the schedule used to suck.

-How will Wellwood respond playing against a team that gave up on him? Answer: About as well as he played for his current team when they gave up on him. Go Woody!

-I don't know how many people would have thought that the Canucks would only have 1 more point than the Leafs at this stage in their preseason thoughts and predictions. I think it's fair to say that both teams are exceeding fan/pundit expectations for the most part.

-The Leafs' season success is like a roller coaster ride. They have not found any consistency yet except for being consistent in being inconsistent. (yikes) They can thump on Montreal one game, lose to the Flames 3 days later, and then beat the Oilers handily 2 nights after that. That has been their week. The Leafs have 2 wins in their last 5 games.
Ron Wilson is behaving that way I thought he would. He'll bench any bum who doesn't play hard, including the higher-paid guys like Jason Blake. I wish more coaches would do that. As a result, we could draw a hard-nosed Leafs squad tonight and cannot take them for granted.

-The Canucks are coming off a shootout loss to the Avalanche and should play inspired right off the bat. They have 3 wins in their last 5. They must bury their chances this time. Put it top corner, boys. If you thought Budaj was great...Toskala can play the same way.

-I wonder if Sami Salo saw my Glass Joe Photoshop, because he is slated to play tonight.

"I felt pretty good out there so I should should be ready to go," said the 34-year-old Finn, who revealed it was actually his upper back, not his shoulder, that was ailing him. "We've done a lot of work on it the last couple of days and the practice went well."

Oh geez. Maybe there is something wrong with your head! Regardless, it's good to have him playing.
The same Vancouver Sun article also stated that Rob Davison will replace Kevin Bieksa. Davison is not known for playing a ton of minutes, so expect a guy like Alex Edler to get more ice time. That is a good thing.

-It looks as though Pavol Demitra is a game time decision.

-Watch for Mikhail Grabovski. He is on a 6 game point streak and has scored 7 goals and 3 assists in that span. He reminds me of Sergei Berezin in almost every way. He has come alive.

-The Canucks will be sporting their new 3rd jerseys tonight. I have not said this yet but I like the new design. You gotta have Johnny Canuck on there! The stick in rink logo looks modernized and less boring than the original.

I like our chances against Toronto. This isn't a lock, but we should be able to inch past these guys or blow by them if they are not ready. Don't expect any quit out of the Leafs though. They have a guy with a huge whip coaching them.

GAME TIME: 4:00 PST (gotta make sure the Torontonians get to watch the Leafs lose before they go to bed)
TV: TSN