Share All sharing options for: The Canucks Third Jersey

OK if you want the real thrid jersey details you can check out the media gallery, this video or this web page over at Canucks.com. I'm a bit sad my option below wasn't taken, but maybe a fourth jersey isn't out of the question? Maaaybe.

First a recap from the Canucks/Avs game: that sucks.

Although Luongo was God again - including topping his own shutout streak from last year with a new franchise record of 242 minutes & 36 seconds - he couldn't contribute in what often buries Vancouver in the end: goal scoring. Leave it to Tony Gallagher to lead the MSM freak out but he can't be blamed; though Pyatt found a pulse the same guys (cough cough Bernier cough cough) aren't getting it done.

It's been easy to ignore the offensive woes (thank you Sedins) when Luongo was playing in another dimension we mortals aren't allowed in, but Wellwood is pointless in three and Burrows has one point in the last five (in fact, so does linemate and all around humanitarian Kesler). Raymond has two in five and Demitra...no, just kidding.

None of this is new obviously, but when your team is fighting to stay in first (when it's debatable they should be there at all) and the only guy who is playing the solid sixty is your captain in net, it's a bit frustrating. To watch as fans and it has to be for him.

However, Luongo is a professional. He would never complain out loud (at least not until March). Luckily, that's why I'm here. Many moons ago Roberto and I came to an agreement that I would be his online marketing voice (he's a shy guy and doesn't talk about it much so don't bother asking him). As I said back then, it would be my honor to say what he can't say though we all know he's thinking.

Therefore, in anticpiation of the upcoming unveiling of the Vancouver third jersey against Toronto on Saturday, I am going to go ahead and leak the third jersey. There are two, pick whichever one depending on your anger level: 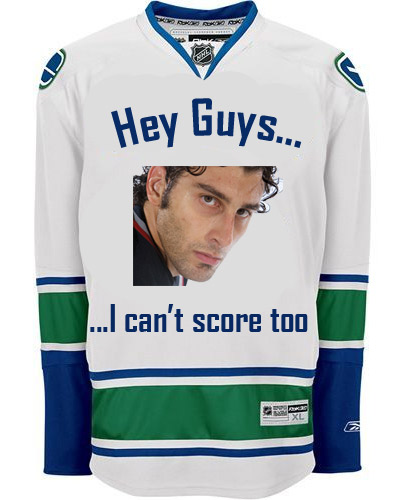 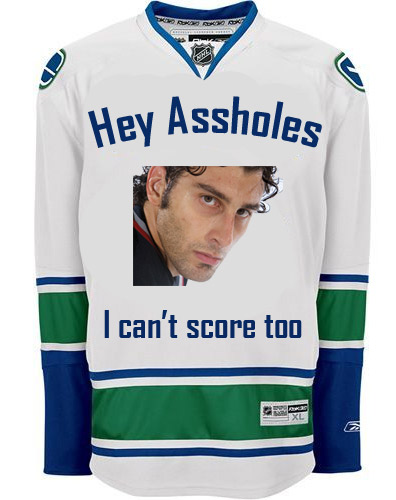