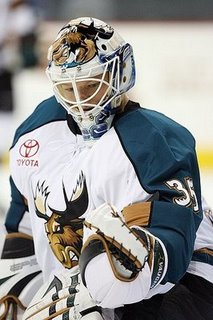 We know Luongo will miss some time. It's just a matter of "how much". In lieu of that the Canucks have called up super-Moose goalie Cory Schneider. From Canucks.com:

Vancouver Canucks General Manager Mike Gillis announced today that goaltender Cory Schneider has been recalled from the Manitoba Moose of the AHL.

The club also announced they have re-assigned defenceman Nolan Baumgartner to Manitoba.

Schnieder, 22, has posted a record of 10 wins and one loss, with one shutout in 11 games played this season with Manitoba. In addition his 1.37 GAA is the lowest in the AHL and his .945 save percentage places him second in that category as well. Schneider has led the Moose to an AHL best 28 points with a club record of 14-3-0 and first place in the AHL's North Division. His 10 wins are tied for the most in the League.

Those are impressive stats. But that is the AHL. How well will he perform in the NHL? He played weel in preseason I remember, but that is different as well. I am looking forward to seeing him strut his stuff. Basically, Schneider will try to prove that he can backup Luongo or be a Canucks starting goalie in the future. What more motivation does he need?
The way the Canucks are rallying around Curtis Sanford lately, I'd say it's a safe bet The Sandman will get the majority of the starts in Luongo's absence. But anything can happen.
Like I've said elsewhere online, I am not worried about the Canucks without Luongo. This is a huge opportunity for Sanford and Schneider.