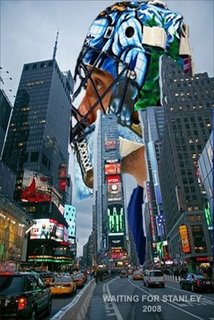 This is going to turn into a mega post over the next 22 hours. I'll post any updates on injuries, lineups, or Ranger-writer bullshit over that span.

I watched the Canucks lose a shootout to the Islanders on Monday evening at Nassau Veteran's Memorial Coliseum and found the Vancouver sextet competitive, but hardly overwhelming. Yes, Roberto Luongo is a legitimate Vezina Trophy candidate, but then again, so is Henrik Lundqvist. Plus, Henny wins more games than Roberto and, hey, Luongo couldn't even defeat Joey MacDonald in the showdown shootout duel.

The curious thing about the Canucks is that their beat writers believe they are a better team than they showed on the ice in Uniondale. On Game Day, both Vancouver papers treated the Islanders game as a virtual exhibition in preparation for the real test at MSG. And for a short while, they appeared to know something that The Maven didn't know. But Scott Gordon's Isles, if nothing else, compete. They overcame an early (MacDonald's fault) goal, scraped together a tying counter and extended the Canucks to the shootout where Luongo faltered and MacDonald did not.

Who the hell was insinuating that the Canucks-Islanders game was a virtual exhibition game for Vancouver? Not the Canucks Nation Blog, which Fischler was linking to. Whatever. He's high on the Rangers, who don't play 100% good hockey but still win. If anything, he has the ego here. I don't think many Canucks fans or writers develop that until we win between 6-10 in a row. We're too high on BC pot here to develop an ego. I kid...for the most part.


It looks as though the Rangers will not have Scotty Gomez playing until at least Saturday. He has an ankle sprain. Fine by me. I'm a big Gomez fan, but I don't want to see him skate circles around us.


I'm sorry, but I don't think I could handle watching Markus Naslund salute the Rangers crowd if they win. I don't even want him to put up a single point. That would make me hate him even more. We HAVE to beat these guys. There is talk out there that Curtis Sanford might play the Rangers and Luongo play the Wild the following night. For selfish reasons I would hope not. However, we do need our best goalie to play against a division rival. Stay tuned on that.

Alex Edler is no longer quarantined. He has recovered from the flu and will return against the NYR.

New York has the best fans in the world, and anyone who says different is kidding themselves. And at the top of that heap are Rangers' fans. They are some of the most passionate, the most loyal, the most supportive and, at times, the most harshly judgmental fans in all the world.

I don't think he reads much media on this side of the continent.
First Malik, now Rozsival. No love for D-men on Broadway unless their last name is Leetch, I guess.

Luongo in against Rangers, Sanford to play against the Wild
I guess Luongo really wants to play at MSG. Can't say I blame him. Gad I hope he out-plays Lundqvist.

Demitra practicing with the Sedins
I'm not a big fan of this move, if he plays on the top line again tonight. I know we are paying Pavol the big bucks and he is a top line guy in general, but I preferred seeing his success with Kyle Wellwood over the jive with the Sedins. The Dank-Hank-Pank line leaves Wellwood playing with underachieving guys like Bernier, Pyatt or Raymond. Raymond is pointless in 5 games now I believe. According to the Van Sun he was practicing on the 4th line yesterday. We'll see where he ends up tonight.

I miss him here because he was an exceptional teammate. He’d do anything for any of the guys. He really cared about what his teammates wanted. People didn’t see that part. People said: ‘Not enough energy, not enough passion, blah blah blah.’ Well, BS; he had that. He just showed it in different ways. (Vancouver Sun)

OK fine, Willie. But those ways weren't on the ice then. We see what he does on the ice...and it lacked passion. Not worth his paycheck in the end. Period.

FREAKY STATS FROM CANUCKS.COM
1 win for the Canucks this season versus an Eastern Conference Opponent (1-3-2). The Canucks lone win versus the East came on November 15th versus the Maple Leafs.

2 wins for the Canucks this season when scoring three or fewer goals (2-6-2). That's not good, kids.

I love those stats under the "Numbers" section of CDC's game preview section. They can either fill your guts with confidence or shred it to pieces.

"If you look back at the last couple of home games, we haven't scored more than one or two goals, so the defense has to stay sharp," Lundqvist said. "But I like that. I like the challenge. We don't really go after the big show. We go after the two points. It doesn't matter how it looks."

RANGERS' MISTER OCTOBERS
The NY Post mentioned that 2 key Ranger forwards were benched in the 3rd period during their last game against the Senators: Aaron Voros and Nikolai Zherdev. Brandon Dubinsky and Voros especially were red hot in October but have cooled off in a big way. More on Dubinsky's November woes here. Zherdev was a risky signing by the Rangers to begin with. We'll see if he can play his way out of this. Keep up the lousy play, boys!

RANGERS' TOP SPOT DECEIVING
Yeah there is all this talk about the Rangers being first in the East, but look at how many games they have played compared to everyone else. And look at the Capitals and Penguins' records over their last 10 games compared to the Rangers.