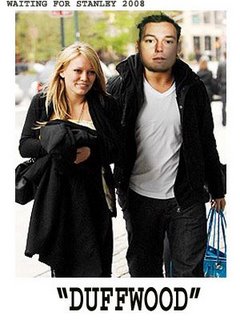 It's tough to say what can be expected from the Islanders tonight. The Islanders are a not-so-surprising 6-9-2 this season, with 2 of those wins coming in their last 2 games...back-to-back wins against the Senators. In the absence of Rick Dipietro, Joey MacDonald is doing all he can to make his mark. He has stopped 96 of 101 shots over his past 3 games, as Canucks.com mentioned.
I'm curious as to how well the Canucks will play 3 times zones away after handing the Leafs their asses on Saturday night.
Vancouver is 4-4-0 on the road this season, and needs to establish some kind of consistency there. We'll see how well a great home stand by the Canucks translates out east. It won't be easy. The 4 games are against the Isles, Rangers, Wild and Penguins, in that order.
So how lousy are the Islanders? They are currently 28th in the NHL. Their goals per game is 21st overall. Their goals against is 22nd. Their powerplay efficiency is 26th overall at a 14.6% rate. Their PK is 9th overall at an 84.3% kill rate. The Islanders have more shots per game than the Canucks do, but they allow more shots against per game than most teams.

Islanders scoring stats. Look at Doug Weight still putting up points. Isn't he a Canuck killer? It's about time Trent Hunter started scoring again. 7 goals and 13 points in 17 games is an improvement for him.

Looking forward to seeing how Wellwood and Demitra click again tonight. We're gonna need it. Wellwood has developed hero status here and recognition around the League. He's so popular, even Hillary Duff dropped Mike Comrie for Woody because he "scores more." Woody has 7 goals Comrie has a piddly 2.