Share All sharing options for: Canucks hope to turn Coyotes into road kill 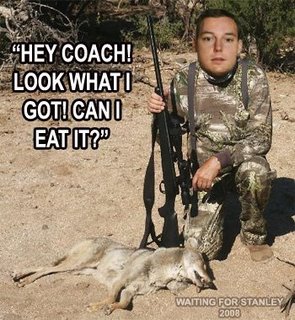 If you find the Photoshop image offensive, then you have come to the wrong place!

"I’ve had success before like this for a couple of months. I was doing the same things in Toronto and everybody was getting all excited there. I have to look at this like it’s only been eight games. For me, I have to prove so much more. I have to stretch this out for years and years before I see myself as a solid NHLer."

Yes Wellwood's consistency will remain in question until he proves himself. Let's hope he bags another one or two tonight...both on the PP, as the rest of the squad hasn't been able to do that yet.

News yesterday from the Vancouver Sun stated that Jannik Hansen is still day to day with his sore groin. Pavol "Who" Demitra will still be out 2 more weeks with his heart, I mean rib issues.
The Coyotes are not missing any significant players.

This will be game 2 of 2 for Phoenix's mini road trip. They beat the Flames 4-2 two nights ago. Inconsistent describes the Coyotes much like the Canucks. Their past 5 games:
4-2 win over Flames
3-2 loss to the Wild
4-1 win over the Penguins
4-1 loss to the Flames
2-1 win over the Capitals

I guess it's time for them to lose judging by the above trend.

Coyote hitmen over their past 3 games:

So there's the guys that need to be shut down. 3 of the 10 goals scored by Phoenix over the past 3 games were PP goals. 2 were shorthanded.

-Let's see if Luongo can keep up his improved play.
-How about a bra, or even a block of wood gets thrown on the ice if Wellwood scores.
-Michel Ouellet will get time with the Sedins tonight. Let's see how that works. Damn, the top line shuffling is never-ending. Just call Carter back from the Swiss League already!

I'm liking the Canucks' chances as they steadily improve. I say a 3-2 win.