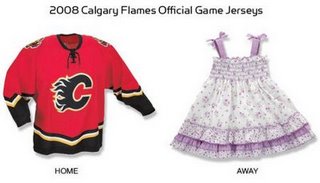 I like the attitude of Ryan Johnson. When asked if he will change his game when he comes back 3-5 weeks from now, as he has a broken finger and foot, he said "No."
Johnson is a gutsy, character guy. He will be hard to replace. Alexandre Bolduc will try to fill Johnson's role the best he can.

"Here, I’m not going to try to do anything crazy, I’m going to play my game, play it safe," said Bolduc. "Not get noticed in a bad way, keep it simple and go from there.

"I think there are lot of guys they could have called up from our team, we’re on a roll right now. Ryan Johnson is a defensive guy and they wanted someone who could fill that role, so I’m just going to come here and play that role the best I can."

I haven't seen Bolduc play much at all, so I don't know what to expect from him. He does have 8 points in 12 games with the Moose this year. Is he going to block shots and be an effective shutdown guy? We'll see.

Mike Brown will replace Steve Bernier, who has a bruised shoulder. Bernier has not found his offensive stride here yet, so we won't miss him up front in that way. He is a pretty aggressive guy though who finishes his checks. Brown will have no problems filling that role one bit.

It appears Kevin Bieksa will return to play against the Flames. I have mixed emotions on his return. I hope he plays consistently.

While the Canucks continue to roll, the Flames are not. Calgary has won 3 of their last 5, but are 5-5 in their last 10. Inconsistent. They are starting to remind me of the team that played under Jim Playfair 2 seasons ago. Calgary's home record: 8-3-1. Their road record: 4-6-0.
-The dominating Canucks are sitting 5 points ahead of the trailing Wild and Flames.
How does the Flames rank in stats with the rest of the NHL?
Goals per game: 10th at 2.96 Canucks are 9th.
Goals against per game: 27th, allowing an average of 3.18 GPG. Canucks rank 3rd.
Who's better 5 on 5? Canucks by a landslide.
Power play efficiency: 12th overall at 19.5%. Canucks are 18th overall.
Penalty Kill efficiency: 13th at 82.5%. Canucks are 19th.
The Flames have a higher shots per game average and they allow less shots per game on average than Vancouver.

So what can we possibly expect from this game? That's easy. We should see an angry Flames squad that wants some redemption from the 2 times we handed them their asses in October: 5-4 and 6-0 wins. Calgary destroyed the Kings 6-2 in their last game. Mike Keenan changed every Flames line to get the team going and it worked.
The Canucks have been pretty composed lately but I think the Flames will break that wall down. There should be plenty of hits and a few great fights to go along with that. That should get the GM Place fans going.
I'm calling a Canucks win at home and a Flames win in Calgary.

For all those people who are still concerned about Luongo being out for a while, here is a thought for you: The Canucks are 14-6-2 right now. If they play 500 hockey until Louie's return they should still be in great shape. 500 hockey is not a lot to ask is it? It helps me sleep at night!

Above image is from Mattgunn.ca