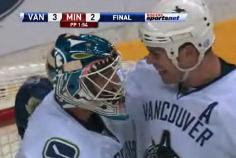 I got called into work right after the Wild scored the first goal of the game. Up to that point I thought the Canucks were showing a lot of hustle and grit even though they had played in New York the previous night. So I did not see the rest of the game.
From TSN:

Daniel Sedin scored the winner midway through the third period in the Canucks' 3-2 victory over the Minnesota on Thursday night.

Steve Bernier and former Wild winger Pavol Demitra also scored to help Vancouver beat Minnesota for the second time this season. The Canucks are 6-0-2 in their past eight games and have not lost in regulation to a division foe in six games (5-0-1).

Mikko Koivu scored twice for Minnesota, which lost for the second time in six games - both to Vancouver.

The Canucks are 12-6-2 now and are 3 points ahead of the Wild and Flames. They own the Northwest Division for now. They have played the same amount of games as the Flames but 3 more than the Wild. So these wins really count for the long term.
So since I missed over half the game...what happened? Who really stood out? The Demitra-Sedin line looked good to start out and I see Demitra continues to score.
I have been waiting to see "goal: Bernier assisted by: Wellwood" for a while now it seems. Nice to see that happened.
Sanford looked steady.
Oh and I guess Edler gave Salo the flu. I thought Edler was quarantined. Why did Edler cough in Salo's direction? He could have hurt him!