Canucks 4 Leafs 2: The day after

Share All sharing options for: Canucks 4 Leafs 2: The day after 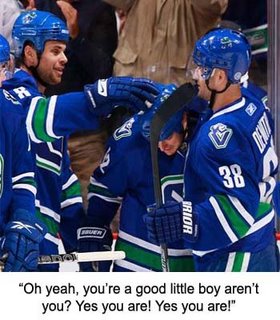 That was a beautiful display put on by the Canucks last night.

- Can Wellwood roof the puck quick or what? He continues his brilliance and is officially recognized as a smart pickup in hockey pools. That is, according to Rotoworld.

-I was wondering how Lawrence Nycholat drew into the lineup... Edler had the flu.

- As much as I hate to say this...Welcome back, Demitra! I believe it was the Vancouver Sun saying today...if that's how Wellwood and Demitra can play together for the first time, imagine how they'll play when they get used to eachother. No shit. That was a treat to watch. Pyatt is just the Pylon on the other wing.
And speaking of wing, that's where Demitra looks content.
I think I saw Demitra backchecking. I did! I did!
So Jes Golbez was quick to spew his Demitra love campaign at me after a 3 assist night...fair enough. So I have made Jes a deal: From today on, if Demitra plays 20 straight games and scores 18 or more points in that period, I will put P.D. (and him only) in the header on this site for 2 weeks. During that potentially life-altering time frame I will post one nice thing about Demitra per day.
Gad, that will almost kill me inside. Good thing the odds are in my favor.

-from the Toronto Sun today:

Having just been given the hook by coach Ron Wilson midway through the second period, Vesa Toskala peered up at the scoreboard, shrugged his shoulders, then plopped his butt on the Maple Leafs bench.

"I actually felt really good," Toskala said later. "I guess that's what sucks the most."

Enjoy your stay in Toronto, Vesa. It's amazing how the Canucks buried their chances so well against the Leafs, where they failed to do so against the Wild.
It's also amazing how happy Willie Mitchell looked when he bagged his first goal of the season.