Call it a hangover

Share All sharing options for: Call it a hangover 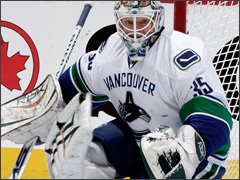 Is anybody panicking after the Canucks' 2nd straight loss? They shouldn't be. I think this type of losing after a massive winning streak is fairly normal. The highs and lows of a season after all.
The power play (1 shot in 3 PP chances?) and attaining golden scoring chances (Nucks outshot in every period) are in the forefront of the Vancouver Province today and I think that is a fair assessment. We need more shots from the point, but at the same time, as Bieksa had mentioned, they don't want to shoot the pucks into a blocking defender giving them an easy clear. Screw it. Blast the puck at guys and make them pay for it if they want to block it. Ask Ryan Johnson about that.
Speaking of Johnson...
The Canucks have lost the first 2 games after Johnson went out with broken bones.
Would that now be 2 games played by Kevin Bieksa since his return with both games being losses? TRADE HIM NOW!!!
I kid....mostly.
I feel the worst for kid Cory Schneider, who played his heart out of Hockey Night in Canada no less, but was not bailed out by his team. 31-18 were the final shots. I like the composure of the kid. I bet he gets a fair bit more games played coming up.

What was Wellwood implying with his hand gestures after his goal? That was cool. A weight off his mind? I will he was thinking... "I'm a genius!"
Who knows.

Getting back to the original point: the Canucks are going through the natural cycle after a winning streak. Look at Detroit: they have lost 3 of their last 4.

"He’s looked great; he’s steady, he’s been great technically and when the pucks are hitting him, that means he’s doing a good job." Luongo

"It’s his first game so it’s really exciting and he’s doing an amazing job out there." - Hansen

"I had a lot of fun out there, it was really exciting and I think I answered a few questions about myself," said Schneider.

He's right. Minnesota and Calgary are now only 1 point behind us. How quickly a 5-point spread can disappear.
The story on Schneider is very interesting. It is great if he can continue to show this maturity and poise, because he could be the future of the franchise if Luongo is not signed long term next year.

"We’re going to make sure we win the next one for him." - Wellwood.