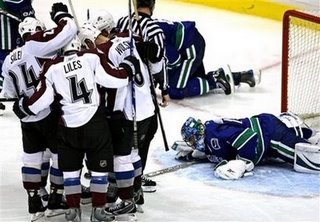 Who would have thought that Peter Budaj would outplay Luongo given all the hype surrounding Roberto this game and the absence of Joe Sakic.
But the Avs' netminder came up huge to give the guys from Denver a chance. What I don't get is why the Canucks wouldn't shoot top shelf with any of their chances. That Wellwood-Sedin-Sedin play would have been the goal of the week had the Sedin got it off the ice. If Wellwood was the shooter there you know he would have roofed it.
Speaking of Wellwood...what a game by him tonight. That guy was everywhere. He put on another display of his magic hands and his patience. No results though. His repeat attempt in the shootout was schooled well by Budaj.

An up and down game. The Canucks came out flat. It was almost like they were playing tentatively in order for Luongo to surpass his shutout record. Once he did, the Canucks went on the attack more. But the Avs outshot the Canucks 16-8 in the first period. The Canucks came alive in the 2nd but could only beat Budaj via a penalty shot by Pyatt.
The Avs' tying goal irks me. Why? Because Glass Salo had fallen on his ass in front of Louie and looked hurt. Then the puck squirts out in front and there are 3 Avs banging away at it. Salo half gets up to try swipe at an Avs player but Paul Stastny bags it. Then Salo slumps back on the ice again looking like he's been shot. Whiny and gutless is Glass Salo sometimes. I don't think he even missed a shift, did he?
In his honor I'd like to dedicate this clip.
Also, just for Sami, here is a song.
You get my point.

A disappointing Finnish, I mean finish. Colorado has now won 7 straight games against us.
At least we still hold top spot in the NW. The Avalanche have a long way to go in order to claim that.