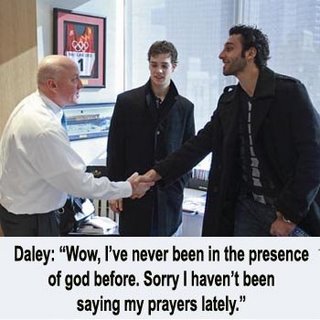 From Iain McIntyre, who personally brought the petition from Nucks fans to NHL HQ:

In case you're wondering, NHL commissioner Gary Bettman was a little busy Tuesday morning. Bettman had his three-year-old nephew in his office, where there is a Stanley Cup made of Lego, because the boy's mom was delivering him a baby brother or sister.

"Generally, when there's not a strong sentiment one way or another, why change the rule?" Daly said. "There are actually logistical issues around it.

"It primarily has to do with ... the position of the goaltender on the ice and his ability to engage the referee in conversations ... [and] the distractions and delays it could cause in the game."

Daly said Durnan* caused "issues" and that the NHL has no problem with the Canucks calling Luongo their captain, as long as he does not wear a C on his jersey or act as captain on the ice.

*Over 60 years ago, goalie Bill Durnan wore the "C" and continually left his net arguing with the referees, so the NHL passed the rule eliminating goalies from wearing the captaincy.
Unfortunate. We just want Louie to wear the "C". We don't want him skating out and arguing over missed or bad calls. He already does that just fine from his crease. So chalk this up as preventitive measures by the NHL.
Bottom line here, like McIntyre stated, is that Luongo doesn't care.

"It's not important," he said. "As long as I'm recognized by my team and my teammates, that's all that matters to me."

Louie isn't losing sleep over it and neither should you.