All about the Wood

Share All sharing options for: All about the Wood 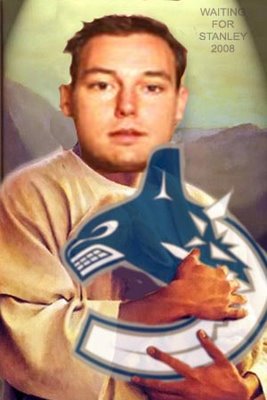 I'm going to hell ain't I?
See you there!

You know, Wellwood week might be extended if he keeps this up.

Canucks coach Alain Vigneault thinks Kyle Wellwood may have gotten a wake up call when he was sent to the minor leagues 2 1/2 weeks ago.
Wellwood says it was more of a much-needed break.
The Canucks' Kyle Wellwood had two goals -- he has six this season. It was his first career multi-goal game.
Whatever the reason, after battling injury and fitness issues for the last two seasons Wellwood is making the most of his latest chance to stay in the NHL.

Kyle Wellwood has heard the jokes about being out of shape while walking around with his shirt off, and suffering the humiliation of being sent to the minors twice.

All this after coming to Vancouver soon after the Canucks claimed him off waivers in June, spending gruelling weeks with conditioning coach Roger Takahashi and going on a special diet.

Cut adrift after four years with the Toronto Maple Leafs, he's feeling good again and making the most of his second NHL tour of duty with Vancouver.

Wellwood, a five-foot-ten, 180-pound native of Windsor Ont., who signed a US$997,500 contract with Vancouver, became the Canucks' leading scorer Tuesday by firing two goals in a 4-0 win over the Nashville Predators.

He has six goals in seven games since being called up from American Hockey League's Manitoba Moose when Pavol Demitra suffered a rib injury.

''For any athlete or professional, it's about yourself personally playing the game and that's where you're going to find the happiness,'' Wellwood said.

''Not being able to play, feeling unhealthy and out of shape you're not going to feel so happy and confident. That was my main goal. I didn't care too much where I was going to play. I just wanted to get back.''

-TSN. And there is more about Woody at TSN.

"I think we just wanted to keep going," said Alex Burrows. " I think we wanted to play a solid 60 minutes, and in the third period that second goal really helped us and obviously afterwards Kyle worked his magic. It was nice to see."

..it’s an absolute delight to see guys like Kesler, Raymond, Burrows, Hansen and (ugh) even Wellwood play far better than anyone could have predicted. But as far as Wellwood being a PP God is concerned, I’m still not sold on him yet.