Share All sharing options for: 11 years ago yesterday...Iron Mike arrived and raised hell! 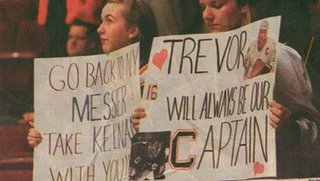 The headlines read: "KEENAN LANDS ON THE MARK SORRY VANCOUVER ADDS MIKE TO MESS".
Then-Canucks coach Tom "Mr. Positivity" Renney was fired and replaced by Iron Mike Keenan. The Canucks came limping out of the gate in the 1997-98 season with a 4-13-3 record when Keenan took over.
Most Canucks fans remember that as a black day, now. But at the time it wasn't such a bad idea was it? To me it wasn't. Something had to be done. I can remember Renney's positive aura speeches after every Canuck loss. Mark Messier wasn't helping matters either, as he underachieved here. The concept to reunite the successful combo of Mark and Mike was a good one at the time.
This may cheese you off, but I was in agreement of Linden being stripped of the captaincy in favor of Mark Messier. I was and still am a Messier fan more than I was/am a Linden fan. There had to be drastic changes made on that team. Canucks fans still hate Messier to this day for the 'travesty' of Linden being stripped of the "C". They hate Keenan for running Trevor out of town. Linden was happy to get away from the mess, actually calling the trade a "relief".
Fine. But if you look at Linden's career stats, you can see that Trevor was 2 years removed from a 33 goal season. In 1996-97 he was plagued by injuries and managed 49 games played, 9 goal 40 point season. In 1997-98 in 42 games played before he got traded, Trevor played 42 games, but only amassed 7 goals and 21 points under Keenan's evil eye. Linden was being labelled as worn down. Long gone, seemingly were his iron man days. Keenan had said that he was not seeing the Trevor Linden of 1994. 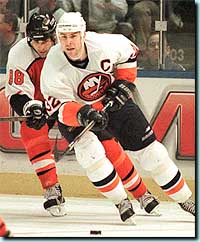 There is a point I'm trying to make...
Keenan traded Linden to Mike Milbury's Islanders for Bryan McCabe (who Keenan thought would be a cornerstone of the franchise), a haywire underachiever in Todd Bertuzzi, and a draft pick, which turned out to be Jarko Ruutu. Linden was actually largely sought after at that time regardless of his injuries and Keenan's opinion.
Yes, the Messier-Mike era floundered regardless of all the changes made. But why just blame them? That team stunk it up badly in the latter stages of the 90's and needed all or most of the shakeups it recieved.
Upper management wasn't helping matters in the drafting category.
Best players drafted from 1995-1998?
Brent Sopel- 1995
Josh Holden- 1996
Matt Cooke- 1997
Bryan Allen/Jarko Ruutu- 1998

You can see the ugly trend there.
But in 1999 things changed and Keenan had his paw prints all over it, even though he was long gone. The Canucks drafted the Sedins in 1999. They got both twins together because they had traded Bryan McCabe and a 1st round pick in 2000 (Pavel Vorobiev) to the Blackhawks in exchange for a 1st round pick in 1999 on that draft day. The Sedins were drafted 2nd and 3rd overall. Thanks Mike, and Brian Burke of course.
Todd Bertuzzi scored 25 goals and 50 points for the Canucks in 1999-2000 and his stats continually escalated until 2002-03, where he scored 46 goals and 97 points. Those seasons provided career years for Brendan Morrison and Markus Naslund as well. Thanks again, Mike.
Alas, Bertuzzi made a mental error with Steve Moore and had to get the hell out of town. So who else but Mad Mike Keenan trades Roberto Luongo and Lukas Krajicek out of Florida to Vancouver for Todd Bertuzzi, Alex Auld and Bryan Allen. Thanks again, Mike.
Krajicek, along with some guy named Simek were traded to Tampa Bay for Shane O'Brien and Michel Ouellet this season. The jury is out on that one still, mostly.
Vancouver fans should almost be loving Keenan by now. Isn't it amazing how one trade of a local hero shaped this team? At some point, you have to look at the Keenan hiring 11 years ago as a blessing in disguise. You just have to wade through all of his ego and near-insanity to find some form of appreciation and gratitude for what he's done. Whether you like it or not, Iron Mike has fingerprints on this team's history. And not all of them are bad. I think the good outweighs the bad actually.
Out of Linden's removal from Vancouver years ago eventually came most importantly Luongo and the Sedins, cornerstones of the franchise. In my opinion, I would trade the idolized Linden all over again if I knew ahead of time that those players would be playing here. Especially at a time when the team was so bad with or without Linden.

That's all.
Devil's advocate, out.