Why did the Blackhawks fire Savard now?

Share All sharing options for: Why did the Blackhawks fire Savard now? 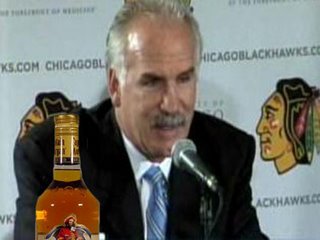 "This was an extremely hard day for this organization and for me personally," said general manager Dale Tallon in a statement on Thursday. "Denis is forever a part of our organization. We made a tough decision that we strongly feel is the right one as we continue to evaluate our team and create a championship-calibre organization that can sustain success. Joel brings us a wealth of experience and a winning track record that will have an immediate and lasting impact," explained Tallon in the statement.

"The only thing I can say is that last year I thought I did a heck of a job with our young kids," added Savard. "Eight to 10 rookies in our lineup. We had a bit of a slow start this year but I thought the team was on the right track. I guess it goes with the territory. As a coach you're judged on wins and losses."

Savard was good with the rookies and youth. And there was and is a lot of them. But as far as the "wins and losses" part goes, the Blackhawks had a record of 40-34-8 last season and barely missed the playoffs. The year before they were in fubar land and had a 31-42-9 record finishing at basement level in the West.
So the Hawks were a little slow out of the gate this season. It was only 4 games in! Jeezus. This reeks of a higher-quality coach applying for the job, or being available and Savard getting canned because of his lesser experience. Scott Bowman alluded to that in the press conference today.
Unwarranted in my opinion. But as a pundit maybe I don't know the whole story. From afar it smells like bullshit though.
Before the season started I had my questions about the Hawks making the playoffs this year. The biggest reasons for that were:
1. Kane and Toews were no longer under the radar and would be checked a lot closer.
2. They kept getting rid of their veteran players like Lang, Kevin Adams, Yannic Perreault, etc.
Now the 2 oldest players on this team are the 2 goalies, Huet and Khabibulin at 33 and 35 years old respectively. The other "oldies" would be:
1. Brent Sopel (31 years old. A leader? Not sure.)
2. Craig Adams (31 years old.)
The rest are all under 30. Is it too much to ask for Kane (19 years old) and Toews (20 years old) to carry this team? I think so. This group still needs more time. Obviously the organization wants to win right bloody now. Joel Quenneville will do just as good as Savard would have. Once again, that is just my opinion.