Share All sharing options for: Where's your crown King Wellwood? 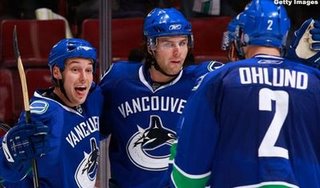 It's no secret that I have been a Wellwood fan since he first played for the Leafs. It's great to see a story like this where he has been blasted for his lack of fitness, becomes unwanted through waivers, then becomes needed because of a Demitra injury, and then performs as well as he has. That's 3 points in 2 games. That would be the game-winning goal he scored last night. Was that a pretty goal or what? What patience he has with the puck. His talent is undenied. The Canucks have found themselves a power play specialist.
Another thing that I like about Wellwood is that he'll chase the puck in the corner knowing he is going to get hit, but rather than turn the puck over, he makes a smart pass right before he gets whacked. Instinct. Wellwood has it. For as long as Wellwood lasts in Vancouver, this is becoming an enjoyable ride seeing him play.

"For me, the power play gives me a chance to handle the puck and things like that, when you get that early in the game, you get into the game a lot more." - Wellwood post game

-Luongo looked much better. That game-saver in the 3rd was plain sick.
-Good to see the other kids like Hansen and Raymond really kick it up a notch.
-Still seeing our d-men get caught up ice a lot. I don't like it. Too aggressive. To Jovo-like.
-The power play is so back it's not even funny. 4 PP goals last night. The Canucks went from 29th in the NHL on the PP to 14th in one night.
-the Canucks are 7th in the NHL in goals per game (3.50)
-They are 5th-worst in goals against per game (3.50)
-They are 28th in the League in shots per game (25.8)
-They are 15th in the NHL in shots against per game (30.1)

But it's all about Wellwood for me at this point. The Canucks had blown a 3-1 because:
1. Luongo flubbed a wrister from Robert Nilsson for the 3-2 goal
2. Mitchell got caught up ice on the 3-3 goal and the Oilers had an odd man rush the other way. Staios bagged that one.

The Oilers had tied it and we were worried. The momentum was not in our favor. But leave it to Cool Hand Kyle to save the day.

Even The Yankee Canuck is loving the Wellwood. Or at least, he's surprised.