Vigneault "out-thought himself" by changing Canucks' lineup against the Capitals?

Share All sharing options for: Vigneault "out-thought himself" by changing Canucks' lineup against the Capitals? 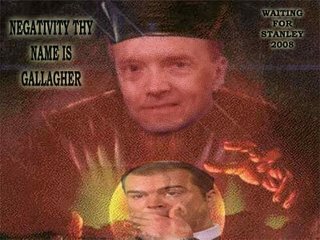 From Tony Gallagher at the Province:

For one night at least, it was back to reality for the Canucks and their fans.
And while there were a lot of factors that played into Monday 's disastrous replay of the Alamo with the Canucks in the roles of Daniel Boone and Jim Bowie, perhaps coach Alain Vigneault outthinking himself contributed to the remorseless cuffing.
Then again, maybe they were so bad nothing would have mattered.
...
What Vigneault apparently did not take into consideration was the fact that with both Hordichuk and Bieksa out of the lineup, the physical edge the Canucks have enjoyed over teams vanished. And for what? Wellwood wandered around like a lost soul and his turnover at the opposition blueline led directly to a penalty by Pavol Demitra. Washington got a power-play goal by Alexander Semin, breaking a 1-1 tie 15 minutes into the game, and the Caps never looked back.

Hold on for a second. There is one line in Gallagher's opinion that I agree with:

Then again, maybe they were so bad nothing would have mattered.

Exactly. That team as a whole was flat and on their heels as soon as the puck was dropped. I would wager on it being from the 2-game war against Calgary and then the minute break between that and having to travel to Washington to play a fired-up Capitals squad. I wasn't totally surprised by the Canucks' crumbling. I just didn't think it would go on for 60 minutes.
I agree with Vigneault's decision for 2 reasons:
1. He was trying to match Washington's skill.
2. Wellwood is going to get his chances to play on occasion whether some people like it or not.
There is no need to panic. There's no need to second-guess the coach after that loss.
There is no need to question Rob Davison's play in place of the injured Bieksa either.
The biggest issues now will be revealed in Detroit on Thursday. The Canucks will have had a break (3 days) and will have something to prove. I expect a great effort from them against the Wings. The issue? Line 2. At some point, the Pyatt-Demitra-Raymond line is either going to click or fold. If it doesn't shape up, what the hell is Vigneault going to do? Does he bench Pyatt or Raymond and give Krog or Ouellet a shot? At least those guys would show some heart, and maybe even hit the net. There is nothing going right for that line right now and it needs to get going if the Canucks are to have any sustained success.
Until then, forget the loss to the Caps. Chalk it up as a stinker. I can't wait to see the game against the Wings.
Oh, and ignore Negative Tony.