"That could be a good line"

Share All sharing options for: "That could be a good line"

You feel that vibe in the air? The chill in every breathe you inhale? That vigor in your eye, the spring in your step? Yup...it's time to play the Los Angeles Kings!

In related news, I suggest you beer up and ready yourself for some depression. See Kitty A for assistance: 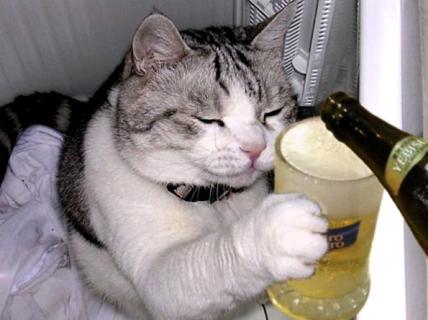 Why depression? Well, first we have Alain "what's wrong with Naslund playing with Isbister?" Vigneault slotting Raymond up with the disappearing twins. That creates a ghoulish second line - one that would leave skid marks in Bobby Clarke's pants - of Bernier/Wellwood/Pyatt, a line that Jason Botchford suggests "could make a three-legged horse look fast." Better still, in the same article, is Vigneault gives them this ringing endorsement:

That could be a good line


Wow. Good thing Vigneault's word isn't hitched to the plunging markets or the Dow would have taken a nose dive firmly in the shitter on that.

And as the offense dries up bit by bit, then there's the defense that isn't really helping keep the goals out of the net and, in addition, doesn't feel like scoring either. The Finnish McInnis? No goals. Shane I-Love-Pien's? No goals. Beeeska, Ohlund and Eddie all have on each.

On the other side of the ice come the Kings, a team lead by Dustin Brown at the moment who has one more point then Daniel Sedin. Sigh (*sluuuuurp, pets drunk kitty, laughs at the wall, stumbles back to the keyboard*). They'll also go with Labarbera in net. Be prepared to see plenty of O'Sullivan, Kopitar, Brown, Calder and Stoll but sadly not his lady friend. Weak.

The Canucks should win this game, but I don't think they will. For some odd reason I think the line juggling won't work, they'll have yet another poor first period, play behind for much of the game and come alive in the final ten minutes only to lose by a goal. Seems to be their style these days. Prove me and the now passed-out Kitty wrong please.

Or, taking the lead from Rudy Kelly, let's just merge these two and bitchslap the conference for the rest of the year shall we?