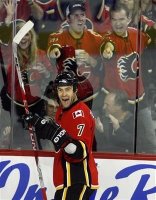 "I find it hard to root against Bertuzzi with everyone piling the hate onto him in the past. Glad to see him doing well."

- said a commenter at The Battle of Alberta.
I have to agree. Hey, I've piled the hate onto Bertuzzi as well. I never liked him floating around the ice, taking bonehead penalties and underachieving. But even a hater like me can appreciate the effort Big Bert is putting out there with the Flames in their first 3 games. Yes, he is still prone to being a floater or looking lost out there on occasion, but he's always been like that. His strength is in his power forward physical game. Call me nuts, but this year's version of Bertuzzi looks a lot more enthusiastic and mean than I've seen him in a long time. He is way more aggressive around the net and he's taking guys out with solid hits. And the goals are coming for him. That's 3 in 3 games for Bert, who currently leads the Flames in that category.
Why the change of heart?
Playing with a super leader and skilled player in Iginla helps.
Maybe being highly doubted when he was acquired by Calgary is motivating him.
Maybe he is getting his mind off the Steve Moore case finally and concentrating on what makes him successful on the ice.
Whatever it is, if he keeps this up, he is going to be a major bargain for the Flames at $2 million. I still hate Bertuzzi and the Flames don't get me wrong, but I can always appreciate a come-back story no matter who it is. Well, except Ryan Hollweg I suppose.

"Todd played an excellent game for us, the whole line had jump and you could see that he's recapturing the form that we've seen in the past and that's exciting for our team and our fans," said Flames coach Mike Keenan

"With Jarome, how he skates and how he shoots, there's going to be some juicy rebounds around if I'm just patient enough," said Bertuzzi. "It's about being at the right spot at the right time and not being overly aggressive."