A Gentlemanly Evening In The Swamp (Caps/'Nucks Liveblog)

Share All sharing options for: A Gentlemanly Evening In The Swamp (Caps/'Nucks Liveblog)

- Brent Johnson's 100th NHL win comes from a very, very uninspired Canucks that has officially given the Caps a win with the least amount of shots against in their franchise history. And I'm just tickled that I got to watch this sickening display live along with the professionals! It was the best of times, it was the worst of times...

- Anyone remember the Washington Bullets? Now there was a team you could get behind.

- I just learned from the Caps bloggers that the lowest shot total the Caps have ever faced is 11 from the Panthers back in 1995 or something. As the penalty ends, the Canucks have nine shots. On the verge of a record here...

- Wellwood waddles in the Cap's zone looking for shot #7 and draws a penalty. 5:43 left and four goals are needed. Can it happen? Matthew McConaughey's appearance on the jumbotron would suggest a strong, mighty no.

- And the Cap faithful begin the slow migration to the doors. Sixth shot!

- Not only are the Caps quicker and more skilled with the puck tonight, but they are far more disciplined. No calls against the guys in red since the first. It's tough to play a more complete game then they have tonight, though the apathetic Canucks are helping accentuate their victory let's be honest.

- Vancouver is seemingly not even interested in trying it would seem. You know what that means! Vigneault is going to have a coronary after this game. (fifth shot!)

- Wellwood has played the least TOI then anyone on either bench.

- Sandford makes an appearance. And he pays INSTANT dividends as the Canucks put pressure on Johnson for the first time since Edler's goal. It's gotta be that new mask.

- I just found some time to speak with Eric McErlain, the infamous mind behind Off Wing Opinion. Very cool guy. The DC bloggers and the DC organization is simply touch notch.

- Semin...no Nylander...no Semin...no Nylander gets a penalty shot for a questionable call if you ask little old me. But whatever, he scores & I forget the score. 5-1? Nylander has 50 points tonight. Somewhere Mike Gillis is strangling a kitten to death. Its name was Buttons.

- Edler goes to the box for hooking and the Caps get a chance to safely pad their...everything. This game is woeful. The Canucks, as a team, have three more shots on net then I do up here.

- Don't we have Swedish twins that can help at a time like this? Wait there's one...he's at center ice...and...he's...going into the penalty box for hooking. Nevermind.

- And now we move quickly into the "Ryan Kesler is hurt" portion of our show. He went down hard in the boards behind Luongo. He got up favoring his left leg, seems fine now. You know, from WAY up here...

- Caps just missed their fifth goaland someone in a red shirt just made Wellwood miss sitting up with me and the popcorn. Absolutely destroyed. Can I blame the jet lag or is it too soon?

- Luongo. Goalie. Big stop. Huge stop. That is all. No, wait, I spoke too soon. Jurcina, he with the tough name on the tongue, scores. The Caps take a 3-1 lead.

- Hey I saw Pyatt! No really I did. He was right there. But in a flash he was gone. But those few moments were beautiful. Thanks Taylor.

- I just had to read about a puck warning. For real? Up here on the sixth level? If anyone of either team can get the puck up here we should give them one of the bankrupt US banks out there as a prize. Seriously, I am tabling that.

- Two shots on goal?! Well done Vancouver. See what happens when you put Wellwood in?

- 20 minutes in and the Canucks are down by one. The past two games they've had ridiculous second periods. Let's go for three in a row. Meantime some kids come out to the ice to do something youth hockey-ish. Excuse me while I get some popcorn and laugh at the young'ens.

- Ovechkin kills penalties too? He should be his own team.

- Jurcina takes an interference call. That is a tough name to pronounce, don't be fouled. The Canucks power play goes back to work.

- The Canucks D collapses way too and Mike Green smartly jumps up from the right circle and buries it. More bullhorn please sir! Les Capitals up again 2-1.

- Johnson blocked a point shot with his knee I think. Even the Caps folks extended verbal sympathy. Um, yeah, ouch.

- With Clark coming out of the box, I don't know if a Cap broke it up or Wellwood made a poor play. Either or, Luongo saves them and Demtra and his baldy goodness (christ NASA must be able to spot his head) go to box for quiet contemplation.

- A "fire Bettman" chant comes up from the bullhorn section while Clark sits in the box. I feel at home suddenly.

- Johnson crushes Ovechkin and the crowd gets restless. Very restless. I heard a curse word or two. OK three. I won't repeat. But Johnson's mom would be upset.

- Kesler and Burrows. It's begging for a sitcom.

- True story: the only real Canuck jersey I have is from the 1999 season. The name on the back? Brashear. If I ever stood next to him, you couldn't tell us apart. True story.

- And of course the computer crashes. To recap, there's a nice man with a bullhorn right beneath me, the Canucks D let Semin walk around Lui's crease untouched and then Edler answered on the PP for Vancouver. Just a few moments ago Brashear left Davison's face in the boards in Luongo's end. And now, with 9:14 to go, the Caps go to the PP with O'Brien in the box.

There all caught up!

Lights go down, Canucks get booed. Caps storm the ice. Time for the real thing. As Han would say, "Punch it Chewie!"

7:02 PM ET Update - It just dawned on me I'm sitting next to nice lady who runs A View From The Cheapseats. The fanhouse has a liveblog going on tonight too.

6:31 PM ET Update - Both teams are out skating. Wow has it been a long time I've seen the Orca in person (naturally it's far easier to find them now with that big 'ol VANCOUVER on it). Demitra's bald head couldn't be more obvious. No Wellwood from what I can see. Luongo steps into his crease for some warm ups.

How about a "oh what the hell" pic? 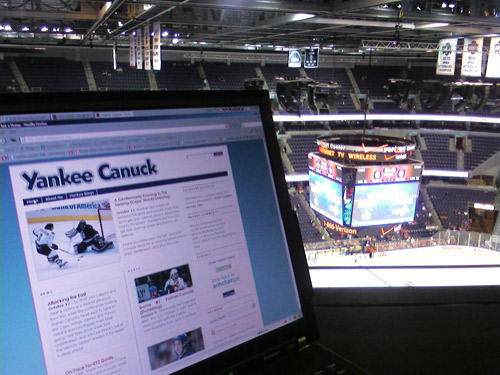 6:23 PM ET Update - Oh yeah, definitely sitting in the wrong place. I was sitting in the Caps press area for christ sakes. In my defense there was no posted list of who goes where. I start to make my way towards the place where I am told the scouts sit (again, I had no idea) when the event staff points me in a better direction, down with the guys from AP and Reuters. I see a lot of hockey people who's names completely escape me at the moment. It feels like that first day of school, "Just smile and be nice." I'm a smiling fool.

The Cap creatures are starting to filter in.

In case you were curious...yeah, this is pretty damn cool.

5:51 PM ET Update - Sitting alone in a massive, essentially empty Verizon Center. Highlights so far include listening to Daryl Reaugh sneeze. Dan Murphy strolling around is pretty cool. The Canucks PPV team is to my left and the TV guys are to my right. Pretty positive I am sitting in the wrong chair too. On the plus side I haven't broken anything yet. Give it time, I'm sure I'll snap something.

...and happy Italian imperialism day to you and yours!

A few notes: first, as earlier reported, Davison is in for Bieksa (though news from this afternoon seem to indiciate he could be back before the end of the road trip), Fedorov practiced on the third defensive pairing this morning and Brent Johnson will be in net for Washington when the puck drops. Fedorov, if he plays on D, is presumably there to help move the puck out of the Caps end against an aggressive Vancouver forecheck.

Johnson has played in 75 games over the past three seasons with the Caps, gathering 22 wins, 35 losses and an overall GAA of 3.24; he's 2-2-2 lifetime against Vancouver, primarily from his days with St. Louis. Kiprusoff he is not, but Vancouver should be mindful of a decent back-up who they probably don't know too much about.

Up front, Ovechkin had two goals on Saturday and would likely love to keep that streak going at the expense of one of the best netminders in the league.

Elsewhere, after a better then expected start, the Canucks are turning some heads. This includes the NHL who named Daniel Sedin the first star this week for his two goals and three assists in the first two games.

Lastly, if you want some fun with pictures, the Peerless Prognosticator has you covered.

Enroute to the Verizon Center shortly. I understand there is some sort of game there tonight? Who cares, I am going for this. Sue me.