Share All sharing options for: Canucks 5 Flames 4: period by period. Thanks, refs 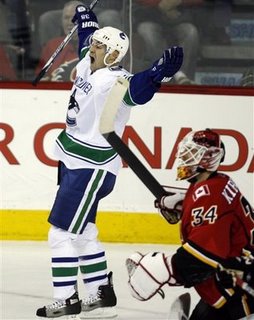 It's a new Flames team tonight. They are even more energized playing at home, executing a tenacious forecheck and hitting everything in sight. When Hank Sedin scored only 2:11 into the game, you got that feeling that another blowout could happen. Kipper looked soft again. But then a string of events happened that put the Flames ahead by 2.
-Andre Roy scored the tying goal about 30 seconds later getting the Sea of Red back into the game. Luongo didn't look sharp on that one.
-Kevin Bieksa went out of his way to hit Wayne Primeau along the boards and injured his leg or knee.
-The Flames forechecked even harder and Bertuzzi gets his first goal by standing in front of Luongo and the puck nicked his stick on the way to the net.
-Luongo is not going to get away with diving this year. I'm fine with that.
-Not even a minute later the puck does the pinball machine thing around Luongo and Rene Bourque taps it in.
So the Flames have answered the bell. The Canucks look 2 steps behind.
-I'm telling you, Mason Raymond is going to get his head taken off one of these days. Bertuzzi almost got him near the end of the first.
-Pavol Demitra...show me something. No really. It's like having Naslund on our team all over again. Perimeter useless player. Demitra will match up better against a skilled opponent that isn't headhunting. In games like this he has to get his hands dirty and he doesn't seem to be the guy to do that. Gutless.
-If Bertuzzi plays all season long like he is playing right now he will get more than 60 points and resurrect his career.

- 2 minutes into the period the fights break out. Hordichuk beats down Roy, and then Rypien absolutely destroys Prust.
-it took a while for the Canucks to finally gain some momentum after those tilts because Ryan Kesler took a hooking penalty right afterwards.
-at 9:41 the Canucks get a surprise goal from their 4th line. Rypien scores again. Nice passing play.
-1 minute later Ryan Kesler barges into the Flames zone, passes it to Hansen who shoots it, and Kesler cleans up the garbage making it 3-3. The Flames had stopped their insane physical forechecking for a while there. But then they got their game back, and Cammalleri slams the puck past Luongo's left pad to put the Flames back up again. I didn't like that goal. Perhaps Luongo should have had that. He didn't expect a shot from Cammalleri though because the former King was being tackled while he shot.
-Can the Canucks come back? If the Flames keep their puck control game going it is going to be tough.
-If the Flames open a can on the Nucks in the 3rd expect this game to get nasty.
-I hate Demitra. Check that...I fucking hate Pavol Demitra. If an opposing player comes at him, he coughs the puck up. Chickenshit bastard. Line 2 sucks so far, but do seem to be coming alive.

-The Canucks hung in there in the 3rd and matched Calgary's physicality. The Sedins and Bernier click again and tie it 4-4. But let's just cut to the chase here. Bertuzzi and the Flames were victimized by a lousy call with under 2 minutes left in the 3rd. Sure Bertuzzi pushed Johnson into the boards and barely deserved the boarding penalty. But Johnson sold it with theatrics that would make Woody Allen proud. Should have been a diving/unsportsmanlike penalty tacked on there as well. The Flames never regained their composure after that heading into OT. So Oake/Hrudey/Milburry gave Bert the gears after the game and it's unfortunate because Big Bert played so well. And hell, I don't even like the guy! Yet a gutsy performance deserves recognition.
-Speaking of gutsy... Demitra tried to be a little more physical in the 3rd. His first attempt at a hit, he ran into a ref and nearly fell on his ass. So I'm watching this clown very closely and my god is he ever terrible. Sure, he scores the winner and yells "Motherfucker!" and that was cool. But he hasn't won me over. Throw that pedestal away. I can't even count how many times he turned over the puck tonight. He is a lousy backchecker. He doesn't fit in. The guy looks content to stay wide on the perimeter and hope the puck comes to him. He isn't going to charge the net or get the puck out of the corners. Gutless. Meanwhile, the players around him are playing their fucking hearts out.
I don't think I've ever been so angry after a Canucks win.
To be positive, that was a hell of a game. The hits were insane. Good thing the Canucks don't have to play teams like Calgary too often. Brutality out there. Once/if the Flames get their shit together they are going to be really good. The chemistry of that team is not quite there yet. Inconsistent.
So, that is 8 games in a row now including preseason that the Canucks have not lost in regulation.
Badda bop bop bah I'm lovin' it.