Share All sharing options for: Fabian Brunnstrom arrives....with a trick 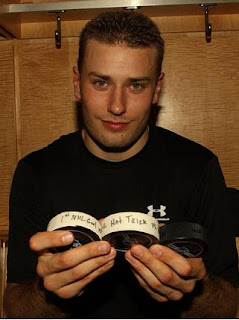 I just didn't get it. In all but 1 of the 7 Yahoo pools I was in, Fabian Brunnstrom was still available past the 12th round. So I took him. I was baffled that people seemed to forget about the Brunnstrom sweepstakes of last season and how he was labelled the best player outside of the NHL.
Then Brunnstrom sits in the press box for Dallas' first 2 games. I didn't get it. Dallas loses their first 2 games in the process. Enter the Fabian. A hat trick and a 6-4 Stars win.

"Of course I was a little disappointed when I could not play in the first two games. It is here to help the team and be involved in everything. That is why it was so good that we finally won last night, it was more important than my three goals."

So which part of that don't you like? Brunnstrom was never assigned to Dallas. He chose Dallas. And with an attitude like that the Stars must be ecstatic about this guy.
Apparently Brunnstrom was playing with Avery and Richards. The line seemed to gel right away acccording to Brunnstrom. They combined for 6 points.
From Yahoo:

"He was nervous when he got here," Brad Richards said. "There’s a lot of expectations on him and it was unreasonable. We wish he could have a hat trick every night but he was in the right place at the right time."

Stars coach Dave Tippett said that while the goals were nice, he also liked the rookie’s all-around game,

"He’s doing things beyond the goals that make you feel good," Tippett said. "He’s a good player who will continue to improve."

Yeah, you have to play a 2-way game in Dallas. Fair enough.
Brunnstrom is 23 years young. Let's see how quickly he adapts to what Dave Tippett expects of him.