Duh...where are the Canucks going to get their scoring from?

Share All sharing options for: Duh...where are the Canucks going to get their scoring from? 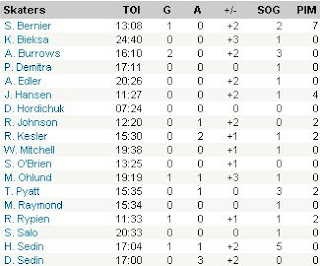 I got sick and tired of that question, as it was asked hundreds of times from several media outlets before the season started. Hell, Scott Oake and the CBC guys asked the same question prior to the puck dropping for the Canucks-Flames game last night.
The answer is glaringly obvious at this point: from the top 3 lines, just as it should be. And once in a while a guy like Rick Rypien is going to blow by 2 defenders and bury a shorthanded breakaway goal!
What a night. The Luc Bourdon tribute was tremendous. Tom Cochrane singing "Big League" was absolutely fitting. Nice touch, Tom. And then the Canucks, especially Alex Burrows, go out and destroy the Lames.
If this is any indication of how the Canucks will be this season:
- we're bigger and nobody f**ks with us. That was a great physical game wasn't it? Hits galore.
- the Canucks' defencemen will pinch in when the chance is given, as you saw with Ohlund's goal.
- the defensive system is still there...but with the reins loosened a bit.
- Taylor Pyatt is going to make you love him, hate him, and then love him again all in the span of one game.
- all Steve Bernier has to do is go to the net. That's how he scored his goal last night.
- watch out for players in contract years: Ohlund, Sedins, Bernier, Burrows, Hansen for example. They are probably going to excel, not only because they are possessed to win, but they want a raise as well. Does Ohlund's game look good or what? Yeesh. Watch him get about 45 points and 1000 hits.

-is Bernier any good? Wow.

-sure, Demitra creates chances with his speed, but he's a softy.

-this Canucks team exudes confidence. They haven't faced much adversity yet, but regardless, suck it TSN. They pegged finishing in 11th spot in the West. The guys out east just don't get it.